ABWIM to Welcome and Celebrate Notable Past Leadership at Radical. Redeemed. Ready. 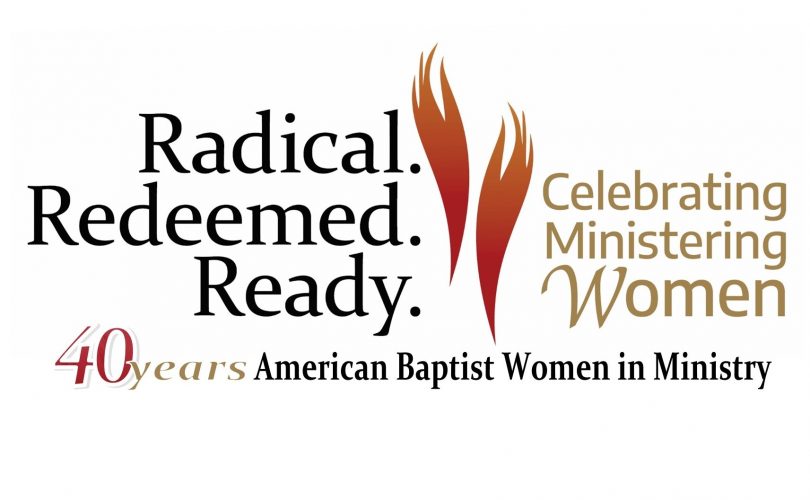 VALLEY FORGE, PA (3/28/22)—Registration for the “Radical. Redeemed. Ready.” conference, to be held June 15-18, 2022 at the Green Lake Conference Center in Green Lake, Wis., is open through May 13, 2022. Make plans now to attend and to celebrate ministering women with notable leaders from throughout the history of American Baptist Women in Ministry.

The first evening of the conference is centered around the theme “Radical.” Attendees will hear from Rev. Lauren Lisa Ng, director of Leadership Empowerment at the American Baptist Home Mission Societies in the opening session. Also part of the evening event, Rev. Dr. Trinette McCray will have a conversation with two notable past leaders of American Baptist Women in Ministry (ABWIM), who will be in attendance throughout the event held in celebration of ministering women.

“One gift that will be ours during this conference is to have the two key leaders of the American Baptist Women in Ministry present with us, Rev. Dr. Margaret Cowden and Rev. Valentine Royal. These two women were foundational to the building of the ABWIM program. Theirs was the challenging work of advocacy, assistance, and support that women who were entering ministry in a time when there was much resistance and fewer supporters needed. Hear their witness to the wonders of God they each experienced as ABWIM grew and their sisters soared,” says McCray.

“The celebratory environment will continue throughout the event, as we gather together: past, current and future leaders in ministry, as well as lay leaders and all those offering support. All are welcome! All ministerial roles, experiences, and contexts; all ages, cultures, and genders; American Baptists and any and all friends in faith. Join us!” said Rev. Dr. Patricia Hernandez, associate general secretary for Women in Ministry and Transition Ministries.

“In addition to hearing from Margaret Cowden and Valentine Royal, former ABWIM Interim Director Rev. Holly Vincent Bean and Rev. Dr. Yamina Apolinaris, former executive minister of American Baptist Churches of Puerto Rico (1989-2000), and the second woman second overall to serve as a regional executive minister of an American Baptist region, will be in attendance at the event. We have so much to celebrate!” said Hernandez.

Learn more about Cowden and Royal

Rev. Dr. Margaret Ann Cowden retired in 2007 after a 30+ year ministry in American Baptist Churches. She was ordained in 1975 by the Cambridge Drive Baptist Church, Goleta, Calif., where she served on the pastoral staff. Other pastoral ministry included the First Baptist Church in Boulder, Colo. In 1979 she joined the staff of Educational Ministries in Adult Ministries. In 1982, she became the first director of the Women in Ministry Project of the American Baptist Churches, and directed that program for 4 years. In 1984, she added staff responsibilities with MMBB, serving in various roles, including associate executive director and later deputy executive director. Concurrent with those roles, she supervised the work of Women in Ministry from 1986-1993. In 1993, she became the president of the American Baptist Extension Corporation and later the treasurer, CFO of the American Baptist Home Mission Societies until her retirement in 2007.

Cowden has served on a number of ecumenical boards, including The Interfaith Center on Corporate Responsibility, Church World Service, The Isaiah Fund, and the Colgate Rochester Crozer Divinity School. She holds a BA from Linfield College; a M.Div. and later an honorary DD from the American Baptist Seminary of the West; and a Ph.D. from Temple University. She also completed programs at Columbia University’s Institute for Not-for-Profit Management in New York City and Harvard University’s Program for Management Development at its Graduate School of Business in Cambridge, Mass. She continues to reflect on her years with ABWIM as some of the most rewarding in her ministry and celebrates the many gifted and dedicated women now serving American Baptists.

Rev. Valentine Royal is an American Baptist-ordained pastor. She is the first recipient of The Dr. J. Alfred Smith Preaching Award (Allen Temple Baptist Church, Oakland, Calif.); and an inductee of the Morehouse College of Preachers (Morehouse College, Atlanta, Ga.). Royal was the keynote speaker for the 2015 Black History Month Observation on the Presidio Military Base in Monterey, Calif.  She is also a graduate of the American Baptist Seminary of the West, Berkeley, Calif.; with undergraduate studies in Special Education and Music at the Lone Mountain College in San Francisco.

Royal’s past experiences include appointments as an associate and senior pastor in two Bay Area congregations; a long-term prison ministry; street evangelism, ministry with troubled youth, homeless families, and battered women.  For over 15 years, she provided ministry leadership locally and nationally, as an advocate for women ministry leaders; a mentor, educator and director for adult, senior and youth ministries; a resource developer; a conference, retreat and seminar leader; and a convention and event planner.

Registration for “Radical. Redeemed. Ready.” is open – we invite you to visit www.radicalredeemedready.com to learn more about the conference and to register!

Get to Know Our Conference Leaders: