ABCUSA > In the Spotlight > “Looking Back and Giving Thanks” – Personal Memories of Dr. Martin Luther King, Jr. by Dr. Albert Paul Brinson 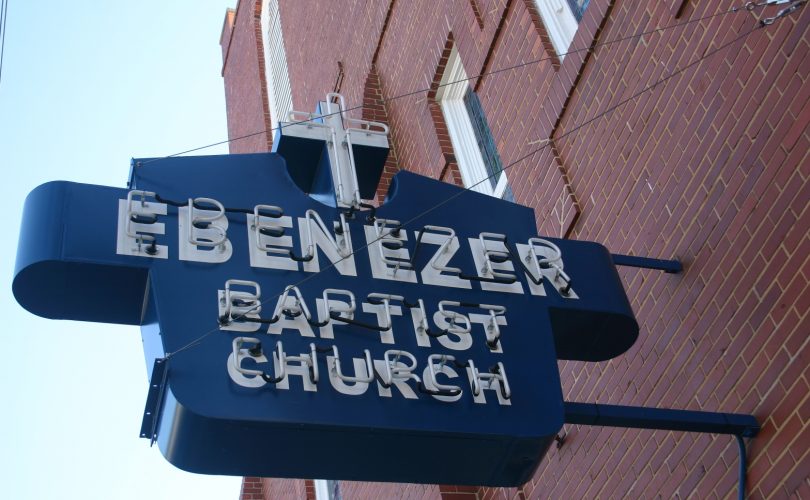 My first memories of Martin Luther King, Jr., began as a child growing up in Ebenezer Baptist Church in Fourth Ward, Atlanta, Ga.

My father left my life when I was about eight years old to grow up in segregated Atlanta, Ga.  I was the oldest of three little boys.

It was Reverend Martin Luther King, Sr. who became a surrogate father to me and his wife, Mrs. Alberta Williams King was another mother.  Their children, Willie Christine King (Later, Dr. Christine King Farris), “M.L., Jr.”, and A.D., became strong figures in my life.

It was “M.L., Jr.” who after entering Ministry at an early age became known for his Ministry which placed him in Montgomery, Alabama as Pastor of the Dexter Avenue Baptist Church.  It was there when he became the leader of the “Montgomery Improvement Association” which began as a protest against segregation in Public Bus Transportation when Rosa Parks, an officer of the local NAACP was arrested for refusing to give up her seat on a Public Bus.

“M.L.” became known as the leader of the movement whose, “Nonviolent Message” became a method of protest to break-down segregation in the South.

In April of 1963, Rev. M. L. King, Sr., and I rode down to Birmingham, Alabama, Easter weekend for the Easter Good Friday – Protest March of Public School Students for the “Good Friday March” through downtown Birmingham and Kelly Ingram Park.  Police Chief Eugene “Bull” Connor had threatened to place the marchers in jail and use police dogs and fire hoses against them.  Rev. King, Sr. and I drove on to Birmingham to be present and witness what the outcome would be.

At the time, I was in my 3rd year as a 7th Grade Language Arts Teacher at Peter James Bryant Elementary School.  We were not going to get arrested, but to be observers and witnesses to whatever would occur.

When we arrived in Birmingham, we went to the 2nd floor “suite” occupied by Dr. King and his staff deliberating as to whether or not the march should take place in the midst of danger and arrests.

In the room were, Dr. King, Jr., Ralph Abernathy, Wyatt Tee Walker, Fred Shuttlesworth, and some others which I don’t recall at the moment.  Each person went around the room expressing their thoughts.  At the time, Rev. Abernathy had just assumed the Pastorate of West Hunter Street Baptist Church in Atlanta, Ga.

After the discussion of everyone’s thoughts, the dangers, etc., “M.L.” got up from the bed and put some water on his face and then went on to become for me “Dr. Martin Luther King, Jr.” rather than just “M.L.” as he went around the room and recalled what everyone had said.  We laughed when he concretely remembered what Ralph had said and the others.  But then, he ended by saying, “I understand, each of your situations and the risks we take, but “I gave my word’. We’ll have to go!”  And then he said, “Wyatt, you call Harry.”  He wanted Wyatt Tee to call Harry Belafonte who would be instrumental in getting “bail money” from his supporters in the entertainment world who could help to secure needed funds.

That moment changed my life and thoughts of “M.L.” becoming “Dr. Martin Luther King, Jr.”  I saw who he really was and what God intended for him to do with his life.  That moment also changed my life!  After that weekend, which found Dr. King in jail writing his classic “Letter From a Birmingham Jail.”

About three weeks later, I knew I couldn’t forget the impact of that experience in Birmingham.  My life had never been impacted by any prior experiences or challenges as this one.

She responded by saying that it was providential that I came when I did, because Cody Perry, his driver, needed to do something and it would be good if I could “pick Martin up at the airport in about an hour and a half.”  I said, sure!

When I went out to the Atlanta Airport to meet him, he merely asked about Cody and I explained that I needed to talk to him about something very important.  As we left the Arrival Gate a Security Officer and a Supervisor walked with us to the cart which carried us to the Parking Lot.

After we got in the car and headed out to the Old Highway 85, I told him that I had something on my mind that I needed to discuss with him.  He interrupted me by saying, “I know what’s on your mind.”  As I looked at him awkwardly, he said, “You want to talk about your call to the Ministry.”

I responded by saying, “How did you know that?”  “M.L.’s” response was, “We’ve been knowing that!”  I responded, “I’m not good enough to be a minister.”  He said, “None of us is good enough.  It is about committing your life to allowing others to see Christ in us.”  We finally got back across town to Johnson Avenue.  After greeting Coretta and putting his things up he came back downstairs.   Once he was comfortable, he sat down and continued to talk about what this all meant.

And he finally said, “I’ll call Harry Richardson, the President of The Interdenominational Theological Center, so that you can begin Seminary in September.”

I sat stunned and confused as I contemplated going home to my wife and telling her that I was being “called to the Christian Ministry.”  At that time we were in our third year of teaching and I was about to tell her that I was giving up my job and going to Seminary.

On Sunday evening, August 4, 1963, Dr. Martin Luther King along with Dr. King, Sr. presented me to a crowded congregation at our “Ebenezer Baptist Church”.

I preached my first sermon entitled, “Let Us See Jesus”, which came from the incident that occurred when “certain Greeks, who had heard about Jesus came looking to meet him for themselves”.

At the end of my first sermon, Rev. King, Sr. stood up and said to “M.L., Jr.” I’ll let you take care of the Licensing procedures according to the Rules of our Church, “Because you and Albert will be the ones left around here.”  On that night, I was licensed to preach and prepare for a life committed to letting others “see Jesus in me.”

There are many incidents in my “Life with Dr. Martin Luther King, Jr….”  Far too many to include in this moment.