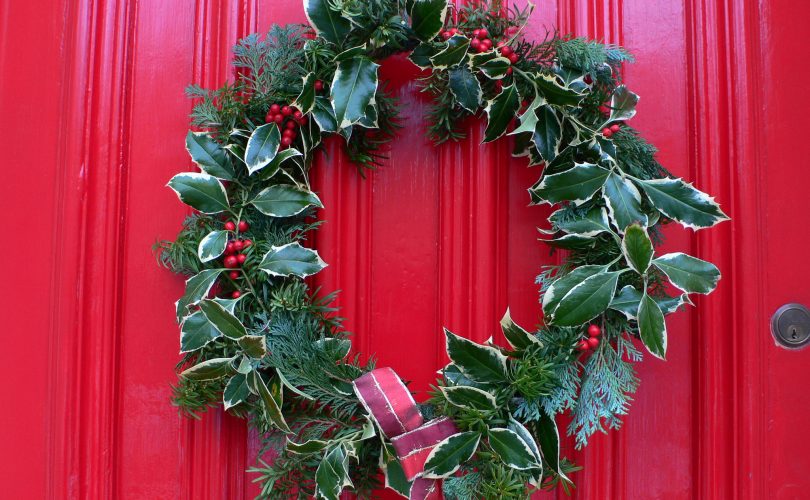 The Breaking News on CNN at the time of Jesus’ birth were fraught with fear and terror. Governments were unstable led by military dictators. People were coerced on a daily basis. It was a dreadful, troubled and turbulent time with Herod the Great dealing with his own threats of mutiny leading to mass terror. He imposed harsh taxes on the people to fund his lavish lifestyle. In such dire and prickly times, the people were anxiously waiting to hear good news.

On this First Advent, we focus on holly which has become one of our Christmas greenery. When we lived in Pennsylvania, we purchased a house that had holly bushes in the yard. A previous owner must have planted them because the one that had obvious attention was the one that was pruned like a gumdrop. It had dark green leaves and bored bright red berries every year. At Christmastime, I would cut some branches with the red berries and fashion them into a wreath to hang on our front door. I wore thick leather gloves to make the wreath or I would have my hands pierced by the sharp leaves. Those leaves that drop on the ground would be treacherous on bare feet. Our children to this day would tell the story that they never went barefooted growing up because of this one holly bush.

Today we often see a holiday wreath on a front door as a sign of the season’s holiday decorations. It’s just one of many things we do to deck the halls. But traditionally, the holly wreath symbolizes the crown of thorns that Jesus wore at his trial and crucifixion. The prickly leaves like the crown of thorns cause blood to spill represented by the bright red berries. As we begin to celebrate the birth of Christ, we are already foretelling as a prophet would say that Christ is coming into the world to save us from our sins when he takes the sins of the world on the cross.

For a child has been born for us, a son given to us;
authority rests upon his shoulders; and he is named
Wonderful Counselor, Mighty God, Everlasting Father, Prince of Peace.

His authority shall grow continually, and there shall be endless peace
for the throne of David and his kingdom.
He will establish and uphold it with justice and with righteousness
from this time onward and forevermore.
The zeal of the Lord of hosts will do this.

The holly wreath is a symbol of hope to come. In Christmastime, we foretell the truth that Jesus Christ has come and will give up his life for us so that we may have eternal life. This is Christian hope.

At Christmastime, we cut some holly to fashion a wreath for our front doors, we chop down or purchase a live spruce to welcome into our homes to decorate with lights and ornaments to canopy over pretty gifts. The good news of God’s love is coming.

At Christmastime, we ritually bring holiday greenery inside from the outside to celebrate that there is hope of a more loving and peaceful future. As people who believe that God’s wondrous creation includes all things—holiday revelers and holly and spruce trees, let us have hope for creation justice in the whole world for today and forevermore.