American Baptist Churches Board of General Ministries Meets in King of Prussia, Pa.

Dr. C. Jeff Woods gave the report of the General Secretary, challenging the board and all American Baptists to live out the Gospel mandate to love one another. He noted that a recent USA Today Poll indicated that 81% of people agree that disagreeing is harming us in our news media, social media, between politicians, and among ordinary Americans.

“Our belief in soul freedom and our commitment to autonomy and interdependence uniquely position us to demonstrate Christ’s love, not only to one another, but also to the world. Given our composition and our commitments, I believe that American Baptists have a responsibility to love one another and to act on that love for a world in need,” said Woods.

“By this everyone will know that you are my disciples, by your love for one another” (John 13:35).

Rev. Dr. James O. Wolfe gave the report of the President, sharing about his service in his term as President and reflecting on prayer. “Prayer is meant to change the attitude of our heart. When our attitude is changed, we change the relationships in which we engage. Prayer is meant to be transformational and transactional….When one is transformed in attitude toward God, one cannot help but be transformed in human relationships as well. All of theology is transactional. God initiated the transaction by reaching out to fallen humanity through the incarnation. Our role in the transaction is to accept the gift of life proffered in Jesus and live as disciples,” he said.

Throughout the meeting, the Board’s Beloved Committee Action Group brought the Board together in times of reflection, learning and prayer. During its Saturday session, the Board gathered in small groups to spend time in prayer for the General Secretary Search Committee members, as well as ABC Officers and staff members. 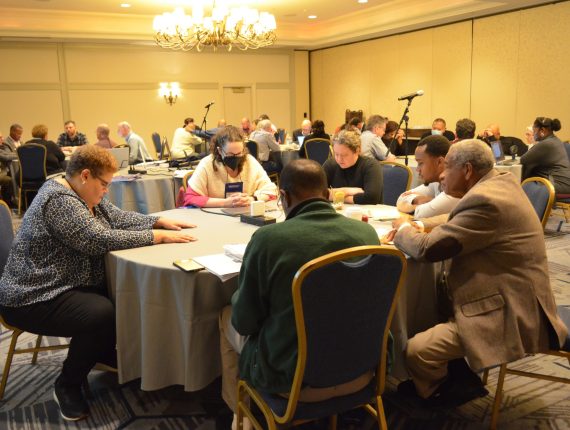 Karen Podsiadly, past president of American Baptist Churches USA, gave a report of the Anti-Racism Convening Table. Podsiadly said, “We are forever grateful for every American Baptist who has contributed to the work of anti-racism in the denomination and greater society, past, present and future.”

The Anti-Racism Convening Table was first brought together with the intention of hearing from the larger American Baptist family and partners. Members of the convening table reviewed and endorsed the Anti-Racism Task Force report and further encouraged the Board of General Ministries to engage in work that would enable leaders to support the entire ABCUSA family as we live into our reality as the most racially diverse denomination in Protestantism. The Board of General Ministries Executive Committee and larger Board will continue to engage in board development activities in support of ABCUSA investigating, exploring, and realizing our truths and paths towards healing.

The Board heard a presentation from Benjamin Jacuk (Dolchok), the Unguwat Program Manager and Indigenous Researcher at the Alaska Native Heritage Center in Anchorage, Alaska. Jacuk recently became the first Alaska native from the Dena’ina Athabascan and Sugpiaq Indigenous people’s groups to speak at a World Council of Churches Assembly – he spoke at the recent 2022 Assembly in Karlsruhle, Germany. Jacuk’s main focus in his current work is research into boarding schools in Alaska.

Jacuk shared with the Board a presentation about the history of the boarding schools in Alaska and the lower 48 states, including sharing a map with denominational involvement of protestant churches with schools and regions of Alaska. In meeting with American Baptist Churches USA, Jacuk shared that he believed this “is the first step in bring healing to not only my people, me, and those who come after me, but to my very own family who went and came back, or never came back at all [from the boarding schools].” He shared hopes for future work and learning together with American Baptist Churches USA.

The board voted to adopt the 2022 budget presented by Budget Review Officer Paul Higgins, and Michele Nickens, Chair of the Credentials and Caucus Committee and Vice President of ABCUSA, gave the report of Changed Relationships of American Baptist churches across the United States and Puerto Rico.

Rev. Dr. Robin Stoops, interim associate general secretary for Mission Resource Development who joined the ABCUSA Office of the General Secretary staff in October, shared with the board his excitement for the work he will be doing in the coming months. Rev. Soozi Whitten Ford, interim associate general secretary for Regional Ministries gave a report of Regional Ministries transitions across the 33 regions of American Baptist Churches USA.

On the final morning of the meetings, action group committee members from the board’s sub-groups (Beloved Community, Communicating ABC Identity, BGM Finance Committee, and the Committee on Christian Unity and Interfaith Relations) reported on their work completed over two session times held amidst the larger meeting.

BGM Director and Chair of the Committee on Christian Unity and Interfaith Relations, Raimundo Barreto, shared in his Committee’s report that he has been elected by the Assembly of the World Council of Churches delegates to the 150-member WCC Central Committee, and will serve until the next assembly in 2024.