Giving Thanks for the Life of Horace Orlando Russell

VALLEY FORGE, PA (ABNS 4/23/21)—A  service of thanksgiving for the life of the Rev. Dr. Horace Orlando Russell was held on Saturday, April 17, 2021 in West Chester, PA. The service was officiated by the Rev. John Murrow, retired associate executive minister of the Philadelphia Baptist Association, and was attended by a small gathering of family, colleagues, and friends. 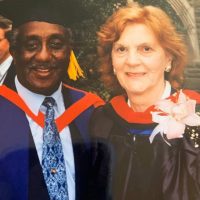 Those who gathered at the DeBaptiste Funeral Home and virtually attended via the livestream broadcast had much to give thanks for when remembering Russell, a Baptist pastor, professor, mentor, ecumenist, and indeed giant of our faith by so many measures. Russell was lifted up as “something of a modern-day Gamaliel” by the Rev. Steve A. Robinson, pastor of the Mattapan Baptist Church, Milton, Mass. Robinson, who preached from the fifth chapter of the book of Acts, compared the characteristics and impact of Russell to that of Gamaliel, who was documented as a wise and well-respected Jewish elder who changed the direction of a life-threatening situation.

Robinson compared Russell to Gamaliel in terms of stature, sentiment, and symbol. In stature, Russell is a celebrated father of the faith, a man of great intellect, whose character was well respected. Robinson recalled that many turned to Russell in defining moments with heightened interest in his words, for Russell was regarded as a voice of divine reason. In sentiment, Russell was a model of wise tolerance who taught the importance of listening to others’ beliefs, practices, and viewpoints with a measure of respect. Robinson noted that Russell trained others to be disciplined in Christian life and thought, always with a theology that took into account human elements. Lastly, Russell was a modern-day Gamaliel in terms of symbol, for there will ever remain a great reverence for Russell. His life’s work and what he represented will never die out.

His life’s work was revered during the reading of Russell’s obituary and punctuated with awe, conviction, appreciation, inspiration, and joy by those who shared personal reflections and memories, including the Rev. Aundreia Alexander, Esq., associate general secretary for Advocacy and Action for Justice and Peace with the National Council of Churches of Christ in the USA. Alexander, who counted him as a friend, pastor, advisor, father in ministry, and father figure says, “He was wise as a serpent and gentle as a dove. We shared a passion for ecumenism and a vision for how living and preaching the Gospel with a united faith voice could transform the hearts and minds of not just individuals but systems and structures. He had a way of seeing you and your potential even when you did not see it. He was a true disciple of Jesus Christ.”

Also present was the Rev. Rothangliani R. Chhangte, senior associate for Grants, Partnership and Strategy Alignment, with the American Baptist Home Missions Societies, who is a former student of Russell. “Dr. Russell had a tremendous impact in my life, and his greatest contribution was in the field of ecumenism. Little did I know that when I took a course on ecumenism in seminary it would later become so valuable in my life. He gave me the grounding for my work and helped me navigate the ecumenical world, providing counsel and encouragement. He took great interest and pride in the work of all his students. He became a friend and mentor to me, and he will be greatly missed.” Chhangte served with the World Council of Churches and Baptist World Alliance as the director of ecumenical formation with the American Baptist Churches USA.

Many across the Baptist family can relate to the notion of Russell as a modern-day Gamaliel, or a celebrated father of the faith and voice of divine reason. By the time Russell came to the United States, he had a lifetime of grand accomplishments in his home country of Jamaica, throughout the Caribbean, and across the globe.

During his twelve-year tenure at Eastern, Russell played a pivotal role in shaping the institutional theological mission, served as Dean of Chapel and Professor of Historical Theology, and helped deepen and broaden institutional ties to the wider denominational and ecumenical communities. Russell held professional status with the American Society of Church History, American Baptist Historical Society (ABHS), Society for the Study of Black Religion, Marcus Garvey Foundation, and World Association for Christian Communication.

Dr. David Bronkema, dean of Palmer, shared with the seminary community upon the news of Russell’s death: “It is hard to put into words the impact that Dr. Russell, along with his wife Beryl, had on his students, fellow faculty members, staff, and on the life of our Seminary as a whole. [He] was like a father to many, and his knowledge of Church history was legendary.”

Colleague Elouise Renich Fraser, upon reflecting on Russell’s classroom teaching approach said, “His ability to enlarge our vision was one of his many gifts to the seminary.”

Russell served on the Board of Managers of ABHS from 1996-2003. Dr. Priscilla E. Eppinger, executive director shares, “[We] are saddened to learn of the death of Horace Russell, a long-time proponent of Baptist history.”

While at Eastern, Russell returned to the pastorate and accepted a call in 1992 as interim pastor of the historic Saints Memorial Baptist Church in Bryn Mawr, PA, and was later called as Senior Pastor in 1997.  As with Eastern, Russell brought to Saints a deep well of wisdom as his first pastorate of thirteen years was at another historic congregation, the East Queen Street Baptist Church in downtown Kingston. His obituary notes this was a congregation established in 1783 by the freed African American slave, George Liele. There Russell incorporated his depth and breadth of church history together with his pastoral vision, leading the congregation in ministries that addressed the whole person—equity, economics, education, access—and impacted the uplift of people and society at large.

Russell continued his visionary pastoral leadership at Saints, guided by the church’s deep spirituality grounded in a proud black history and tradition rooted in the Black Migration and Philadelphia’s Quaker origins. He spearheaded several initiatives that tended to the whole person and challenged social norms that prevented the uplift of all people.

Virginia Holmstrom, retired executive director of the America Baptist Women’s Ministries and member of Saints during Russell’s tenure, appreciated his advocacy for women in ministry as evidenced by the clergywomen on the church’s ministerial team, and shared how his preaching continues to impact her today. Holmstrom said of worship services, “Dr. Russell prompted us by example to look beyond the comfortable rhythm of praying for those who sit in our pews and to remember and pray for communities of Believers on every continent who suffer persecution because they are Baptists. I strive to also model that same call to pray for those intimately experiencing the sacrificial cost of discipleship. Indeed, we are links in God’s much larger beloved community.”

The Rev. Dr. A. Roy Medley, who was serving as the ABCUSA General Secretary at the time of Russell’s retirement from Saints, said, “The strength of local congregations such as [Saints Memorial Baptist Church] is our denomination’s life’s blood. It is through communities of faith such as [Saints] that we best serve a needy world as the hands and feet of Christ.”

Russell was able to authentically expand people’s compassion to communities across the world because he gave of himself to global service and experience. While in Jamaica Russell served as the general secretary of the Student Christian Movement, vice president of the Jamaica Baptist Union, and many years within the Baptist World Alliance (BWA), including as a member of the BWA Baptist Heritage and Identity Commission, Baptists Against Racism Commission, and the BWA Academic & Theological Education Workgroup. He represented Jamaica Baptist Union at the Faith and Order Commission of the World Council of Churches in Geneva, Switzerland, from 1968-1990 and also served as a Vice-Moderator of the Standing Commission. In 2008, Russell received the Jamaican National Honours’ Order of Distinction, Commander class, for services to religion and education in Jamaica and abroad.

Former BWA General Secretary Rev. Dr. Neville Callam remarks, “The passing of Horace Orlando Russell represents a significant loss to the Baptist and ecumenical families and a monumental blow to the many Russell mentees across the world. A truly great human being has completed his earthly pilgrimage and has marched through death into fullness of life with God. A steward of genuine kindness, his was a life of loving service. Dr. Russell was quintessentially a person for others.”

Russell was a member of the First Baptist Church of Philadelphia, PA until his death. His church family had this to share as they grieved their loss:

“We join with brothers and sisters worldwide in struggling to put together words that adequately describe the impact that Dr. Russell and his wife, Beryl, have had on our communities. His contributions to theology, the global church, and the very kingdom of God are monumental. ‘My sheep listen to my voice; I know them, and they follow me. I give them eternal life, and they shall never perish; no one will snatch them out of my hand. My Father, who has given them to me, is greater than all; no one can snatch them out of my Father’s hand.’ (NIV John 10:27-29)”

Robinson, in his Acts 5 sermon at the thanksgiving service, said repeatedly of Russell, “And to him they agreed. Verse 40.” He further added, “Dr. Russell’s memory will never die out. He is a true churchman. [He] was more than respected; he was loved.”

Russell was born on November 3, 1929 in Clarendon, Jamaica and died peacefully on April 5, 2021 at the age of 91. He is survived by Beryl, his wife of sixty-three years, children, Elisabeth, Jonathan, Stephanie (daughter-in-law) and Heather, grandchildren, Lisa, Julian, Rachel, Ashley, Justin and Yohan, siblings Myrtle Hyacinth Mason and her husband George, Dorleen Evadne Williams and Homer Laverne Anderson, and numerous nieces, nephews, cousins, and other family.

The full obituary of the Rev. Dr. Horace Orlando Russell can be found here.