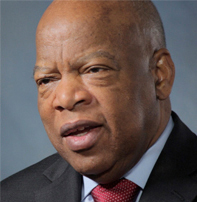 American Baptist Churches USA remembers Rep. John Lewis, civil rights leader and U.S. representative for Georgia’s 5th congressional district. Lewis, an American Baptist, received the Presidential Medal of Freedom and was a pioneer in the Civil Rights Movement struggle for racial equality. He was one of the leaders of the Freedom March on Washington in 1963 and the voter registration march in Selma, AL in 1965. He also received the Edwin T. Dahlberg Peace Award from the American Baptist Home Mission Societies in 2003.

Congressman Lewis dedicated his life to protecting human rights, securing civil liberties, and building “The Beloved Community” in America. Inspired by the radio broadcasts of the Rev. Dr. Martin Luther King Jr. as a young boy, Lewis tirelessly carried on the fight for civil and human rights, and he remained at the vanguard of progressive social movements. His dedication to the highest ethical standards and moral principles won him the admiration of many of his colleagues on both sides of the aisle in the U.S. Congress. Find out more about Lewis here.

“John Lewis was a visionary leader whose experiences propelled him forward as a model for others. His legacy of leadership and commitment to racial justice will live on forever,” said ABCUSA Interim General Secretary Dr. C. Jeff Woods.

At the time, Lewis reflected on involvement in the civil rights movement and American politics being an extension of his faith:

“From attending segregated public schools in Alabama as a youth to standing on the streets of Washington, D.C., in his 80th year to add his personal presence to the unfinished work of racial equality and social justice in America, Congressman John Lewis, a son of sharecroppers, helped to bend the moral arc of this country toward our living together as a beloved community of hope and love. Representative Lewis exemplified this noble quest with an unwavering commitment to nonviolence and staunch spiritual values. His courageous life bore the outstanding credentials of a wounded but unbowed warrior,” said Rev. Dr. Leo S. Thorne, former Associate General Secretary for Mission Resource Development with American Baptist Churches USA. Thorne worked with Lewis on the “Inspired, Transformed…American Baptist Churches” video.

He noted that “American Baptist is very progressive. It’s been out there as a headlight and not a taillight. Been pointing the way and leading the way.

Lewis received the Edwin T. Dahlberg Peace Award at the 2003 Biennial Meeting of American Baptist Churches USA in Richmond, Va. from the American Baptist Home Mission Societies, for his more than 40 years of work for peace and justice, beginning in the Nonviolent Civil Rights Movement and continuing in the U.S. national political arena. Encouraging American Baptists to pursue ministries of reconciliation, he urged attendees of the event to focus on the challenge of peace, which “is as old as the beginning of time and as new as today’s morning newspaper.”

He was honored by President Barack Obama with a Presidential Medal of Freedom in 2011 and at the 125th anniversary of his home church, Ebenezer Baptist Church, a month later. Martin Luthe King, Jr. was co-pastor of that congregation in the 1960s.

More recently, Lewis gave the benediction by video at the nation’s National Prayer breakfast on February 6, 2020.

Lewis said the country needed peace, “now more than ever before.” Lewis asked God to bring the country together and prayed Americans would treat each other as “brothers and sisters.”

“We must believe in one another,” he said. “We must never give up on our fellow human beings.”

“My heart carries deep sorrow and overwhelming gratitude as I learn of John Lewis’ passing. What a powerful voice for equity and justice in our nation,” noted Rev. Judy Fackenthal, recent American Baptist Churches USA President, 2016-2017. “I’m sad that his voice will no longer be heard. I’m grateful for all he worked toward and accomplished. It is up to us to carry on what Rep. Lewis and his peers began.”