ABCUSA > In the Spotlight > Hopevale Reflections by Carolyn Predmore

75 years ago, 11 American Baptist Missionaries were martyred at Hopevale, Philippines.  They had been hiding in the hills of a remote area of Panay.  They had chosen to hide, rather than to surrender to the Japanese Forces.  They were aided in their hiding and supported by their Filipino brothers and sisters, who brought them food, necessities, and news of the war.

One can question their wisdom in seeking to avoid capture by hiding.  They had thought that the war would end quickly, but in hiding they endangered their Filipino brothers and sisters.  But no matter how much one might question the wisdom of their decision, one cannot question their devotion to Christ to follow His leading.

James and Charma Covell have a special story in that they had been missionaries to Japan.   Having been a missionary to Japan, myself, I know how much the people of the Japan Baptist Union honor the James and Charma Covell.  When the war started heating up, they were asked to relocate to the Philippines since they were causing waves with their protests against Japan’s action in the war.

When Hopevale was discovered by the Japanese soldiers, James spoke to them in Japanese and asked for time to pray and sing hymns to prepared for their death.  After about an hour, they said they were ready.  One by one the missionaries were taken away and beheaded.

God took the defeat of these missionaries and created victory.  From the death of these missionaries, the Convention of the Philippine Baptist Churches grew strong to the organization that we have today.  Jesus said, “Unless a seed dies, it remains a single seed; but if it dies, it produces many seeds and then much fruit.” (John 12:24) 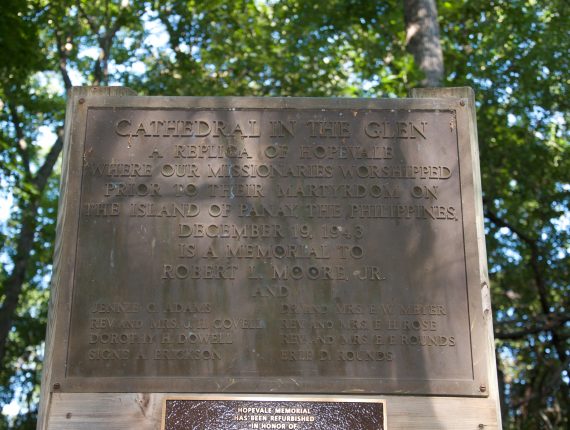 I feel honored to have been able to participate in the 75 Year Commemoration.  The highlights for me were the Gleanings, where we got different perspectives of Hopevale, and the trek to Hopevale.  It was amazing to see the participation of everyone going to pay tribute to those who had died.  Even though it rained, and I was not able to go to the actual, chapel in the glen, I was able to get a feel of what it had to be like to be hiding at that time.  It rained, and the ground became very slippery.  It took three people to help me get back up to where our vehicles were.  In some ways that is symbolic of the mission to the Philippines.  We remember the eleven missionaries who were killed, but they could not have done their ministry had it not been for the “three” Filipino brothers and sisters who helped with their ministry.  Eleven missionaries were killed, but many others were also killed.  God used the eleven missionaries to build God’s Church in the Philippines and to strengthen Central Philippine University.

I am thankful to the committee who planned this time and included us in the plans.  I am especially thankful to Henna, who accompanied us everywhere we went, and to Jec, for his work in the planning.  Thank you.