ABCUSA > In the Spotlight > Go with the Lord! by Sharon Dumas

My trip to the Philippines had a two-fold purpose. To visit our American Baptist International Ministries (IM) partners and to commemorate the Hopevale martyrs. We were very busy most days, so did not have much time for sightseeing or shopping.

After a few days in Manila, we flew to Iloilo on the island of Panay in the Visayas to learn more about Hopevale and other things about the area. We visited a couple of museums to get a feel for the local culture and the role Iloilo had in World War II. While in Iloilo, we stayed at CPU (Central Philippine University). They had a wonderful light show each evening which symbolized the light of Christ. We also met the executive secretary of the CPBC and learned more about the Convention of Philippine Baptist Churches. (See appendix 1 to learn more about the history of Baptists in the Philippines). We visited the first Baptist church in the Philippines which is located in Iloilo.

To get to the actual site of Hopevale, we drove for a couple hours, then transferred to trucks and motorcycles for a short distance before completing the journey by walking another short distance. While I was at Hopevale, I was asked why I wanted to hike to the glen in the rain and mud. The question took me by surprise and even angered me a little, but it was actually a good question. I was also asked if it was worth the trouble and risk. I thought it was and appreciate the help I got from my hosts. I am interested in learning more about Hopevale because in general, I love history. Secondly. this story is part of my Baptist heritage and thirdly I can gain some spiritual insights from the story. It is one thing to read about something, but It is quite another thing to experience first-hand elements of the story. During our ”Gleamings of Hope”, many speakers spoke of service and sacrifice. I think struggle could be added to this. I was impressed first by the lushness and thickness of the foliage as well as the beauty of the foliage and secondly by the mud and rains. There are more amenities in the area than there were in 1943 but it was still a difficult walk. Although the foliage provided some protection, it is obvious to me that the living conditions were challenging. especially for women and children. During the 20 months, the missionaries had to deal with insects, mosquitoes, leeches, monkeys and lizards as well as rain and mud. They depended on the local church members for food. I want to thank all those who walked beside me during my walks. They really helped history come alive for me. The Hopevale story is not well known even in the Philippines but it is an important part of Baptist history and legacy and should be preserved by sharing this story with as many people as possible. Briefly, this is the story of Hopevale; See appendix 2 for transcription. 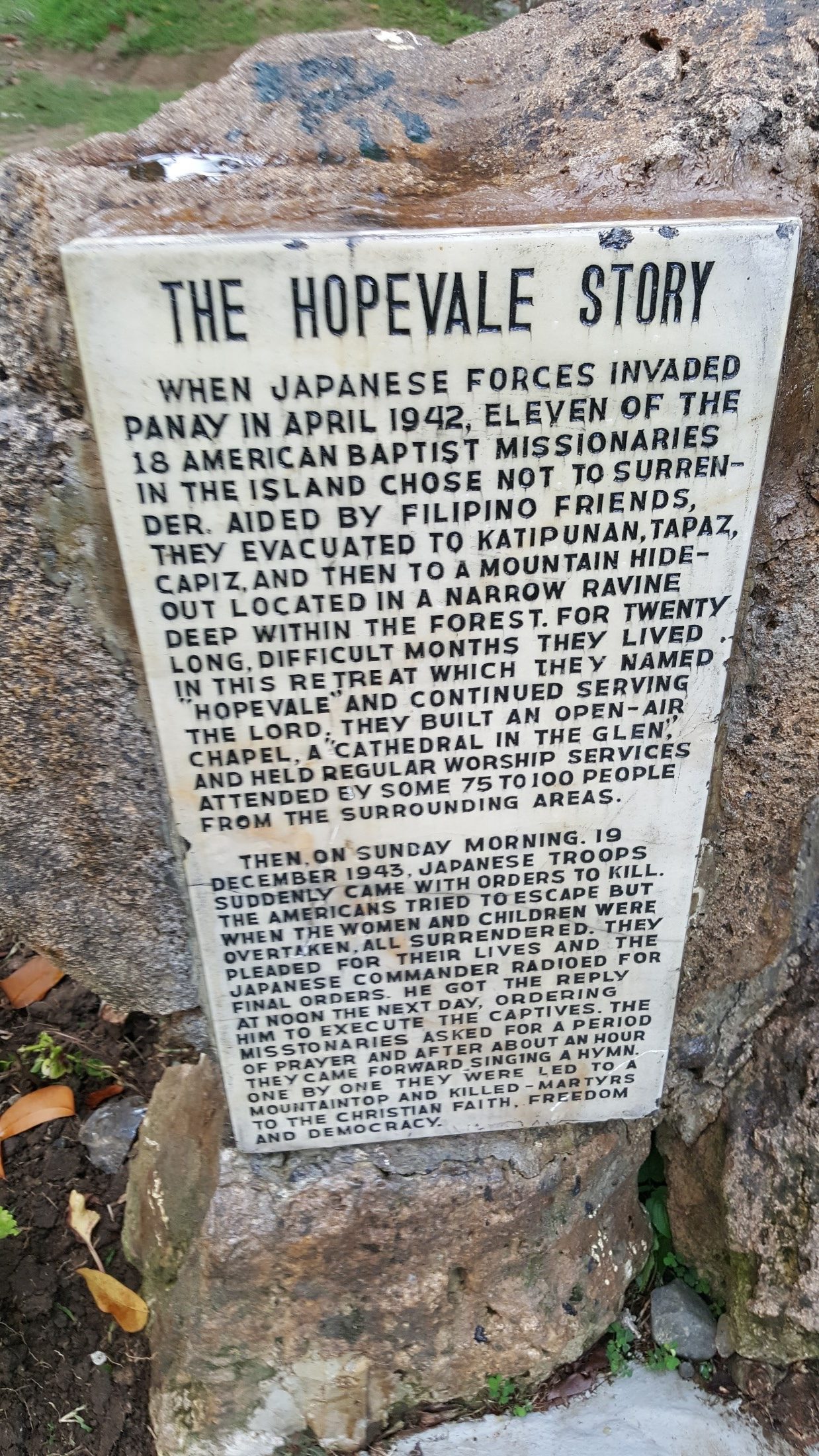 Ominously, a red cloud appeared in the sky the day before the tragedy.

Two weeks after the killings, Dianala and another church person recovered the bones and buried them secretly in the Katipunan Church. Katipunan means congregation. Later the bones were placed inside the white cross. There are different theories as to how the Japanese discovered the missionaries.

A poem, by Jennie Adams, one of the martyrs, describes their outdoor place of worship.

Cathedral in the Woodland, wrapped in quietness
A shelter haven in refreshing restfulness
Secluded spot within majestic clefted rock
Where hills in age past have known a rending shock
The rugged rocks rise up to make a sheltering wall
The leafy dome above spreads out to cover all
The trees lift up their boughs toward unfathomed space
The ferus and flowers fair profuse in crannies grow
Soft shadows face and shift while breeze wraps low
The rugged cross is greatly touched by sunshine clear
The heart in mediation feels that God is near
Beside the silent altar waiting there alone
The world is lifted upward to the heavenly throne
The heart repentant finds a solace waiting there
Keep gratitude and praise pours forth we sing and prayer
Cathedral in the woodland shaded calm and still in quietude we wait to know the Father’s will. 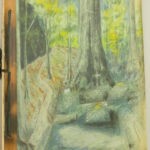 A picture of the original glen. The glen originally had many large orange trees, but they were destroyed in a storm.

Many people upon hearing the story, would be angry and try to figure out why God let this happen. (See appendix 3.) Regardless of our understanding or acceptance of the reason for the murder of the martyrs at Hopevale, it is important to formulate and carry out a response that glorifies God and advances the Kingdom.

One way to honor the martyrs was to visit the actual sites despite the cost, the time and risks involved. This experience gave me a better understanding of the sacrifices of all involved. Abraham Lincoln, in his Gettysburg Address, said that the best way to honor the sacrifice of the dead was to continue their work. In like manner, we must continue to run the good race.

Perhaps the first step in this process would be to embrace the Hopevale Declaration in word and deed. Here is the text:

We devote our obedience to
Christ’s Great Commission,
We have faith in the
Transforming power
Of the Gospel in Christ
We are willing to pay the price of doing God’s Mission,
And we choose hope as the source of courage and devotion
in doing Christian Mission today.

Perhaps the most important thing we can do is to pray others into the kingdom. It is also important to tell the Hopevale story at every opportunity so that many can be inspired and encouraged. Romans 8:28 gives us hope, that God can use even “bad” things to work good. During our time together, there was a lot of time for reflection. Many words surfaced including such terms as service, sacrifice surrender and hope. My immediate response was forgiveness. Just as descendants of the victims have forgiven the Japanese, so we must also demonstrate God’s love by forgiving others. Once again, I believe the phrase, “Go with the Lord” summarizes all the above.

Aftermath of the massacre

Many Filipinos and Americans were murdered along with the missionaries, but some other Americans escaped.

The Japanese burned the bodies of the victims. The daughter of the Corvells who had worked in Japan, chose to work in a Japanese interment camp. This act influenced many Japanese to become Christians. Years later, a Japanese soldier met Jim Sugaya, who was the Genera Secretary of the Baptist Union on a train. The soldier said he had been converted to Christianity after the massacre.

On December 17-20, 2018, the Convention of Philippine Baptist Churches spearheaded the Hopevale Diamond Commemoration to be held at Central Philippine University, Filamer Christian University and in Hopevale, Tapaz, Capiz. I was privileged to be a part of this event and I want to thank all my hosts, hostesses and travelling companions for allowing me to be a part of this great experience. (See Appendix 6)

Here are some prayer requests gleaned during the trip:

On Oct. 9, 1899 The Baptist Missionary Union decided to a start a mission. When the United States occupied the Philippines, many Protestant missionaries arrived. In 1901, the Evangelical Union of the Philippines was organized. Each group was assigned a certain area to evangelize. In May of 1935, the Convention of Philippines Baptist Churches (CPBC) was formed. Presently there are about 1000 CPBC churches.

The Baptists took over the Iloilo Mission Hospital which had been started by the Presbyterians in 1924 and today it is part of CPBC. The Baptists also support Central Philippines University and Filamer Christian University as well as Capiz Emmanuel Hospital which was burned down during World War II but is again operational. IM also has partnerships with Compassion with the Poor (CPWP) and Samaritana in Manila. Both of these organizations work with at-risk people.

When Japanese forces invaded Panay in April 1942, eleven of the 18 American Baptist missionaries in the island chose not to surrender. Aided by Filipino friends, they evacuated to Katipunan Tapaz, Capiz and then to a mountain hideout located in a narrow ravine deep within the forest for twenty long difficult months. They lived in this retreat which they called Hopevale and continued serving the Lord. They built an open-air chapel, a cathedral in the glen, and held regular worship services attended by some 75-100 people from the surrounding areas.

Then on Sunday morning, 19 December, 1943, Japanese troops suddenly came with orders to kill. The Americans tried to escape but when the women and children were overtaken, all surrendered. They pleaded for their lives and the Japanese commander radioed for final orders. He got the reply at noon the next day ordering him to execute the captives. The missionaries asked for a period of prayer and after about an hour they came forward singing a hymn. One by one, they were led to a mountaintop and killed, martyrs to the Christian faith, freedom and democracy.

Why Do Bad Things Happen to “Good” People?

Human beings with their finite minds cannot completely answer this question. However, here are a few things to consider.

Life’s Trail on my Wanderings
Through all my wanderings
My Lord has cared for me,
Although the path ahead,
I could not always see.
What though my feet should slip
What though my strength should fail
My Savior holds my hand,
While climbing up life’s trail.

Faith of our Founders
Our faith too
The word of God guide us to you.
One God unchanging Lord of all
We worship you, on you we call
God grant us faith and courage hold to live for you as of old 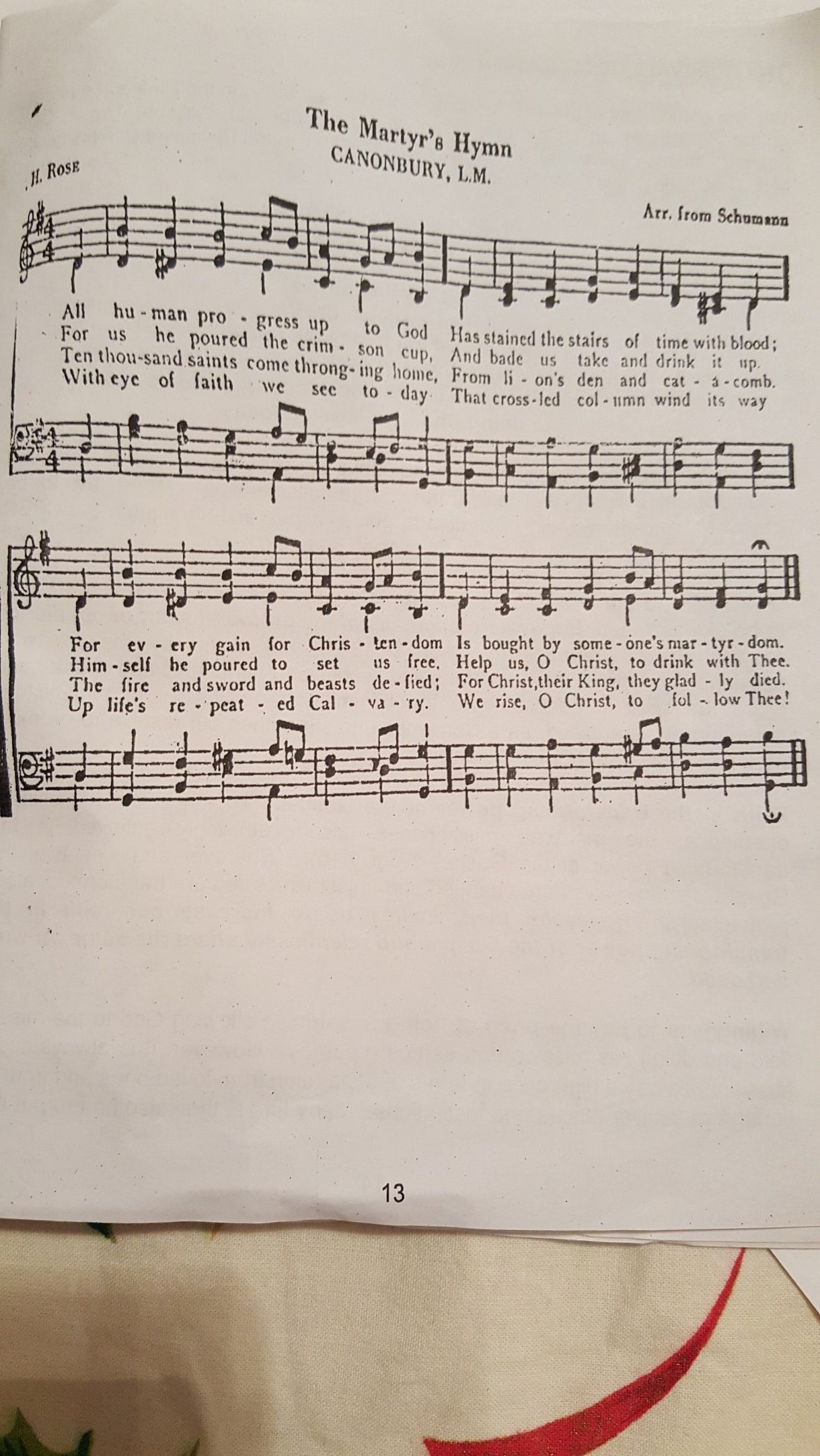 Thanks to the following for their kindness during our trip. Please excuse and notify me of any omissions or mistakes.