It was an atypically warm November morning in Milwaukee when we pulled onto the street next to Despensa de la Paz, a food pantry on 22ndStreet in downtown Milwaukee southeast of Miller Park.  Ours was already a bit of an eclectic group, myself and five women who were part of an intergenerational knitting group in Fond du Lac Wisconsin.  They had made boxes and boxes of scarves and felt-lined mittens to be given to men, women and children who were living on the streets in Milwaukee, and we were 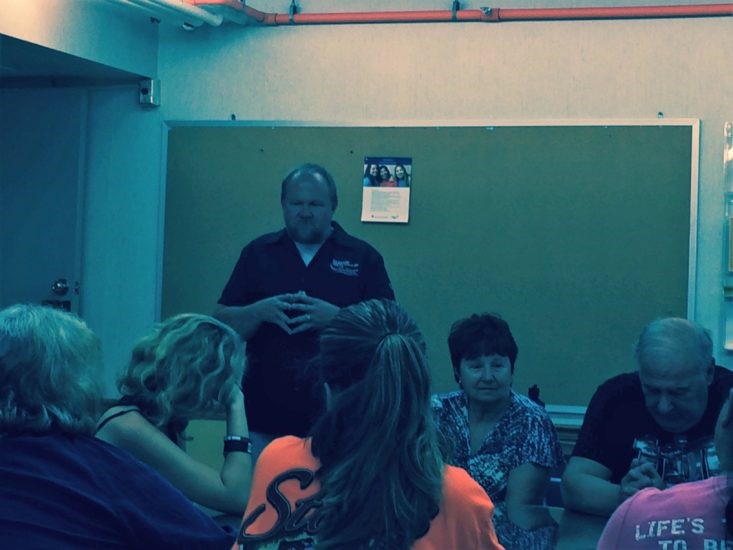 here both to deliver these knitted items and to see what Despensa was about by volunteering that morning.  A few of us had volunteered in similar ways before, but for others, just coming to the inner-city of Milwaukee was well outside what they were familiar or comfortable with.

We had arrived well before the doors were officially ‘opened’ to start distributing food, but it was already bustling with energy; volunteers and members of the community talking, laughing and getting organized.  At the epicenter, core leaders were busy ensuring that things were ready to go. My friend Max Ramsey, pastor at Immanuel Baptist Church in Brookfield WI, was one of these, welcoming volunteers and guests, talking and laughing and defusing the occasional tense moment between guests.  After a warm welcome, we were given a quick briefing and set loose.

Most of our group were recruited to be runners, volunteers who would walk with guests through the food distribution part of the pantry.  It wasn’t a particularly difficult job; our orientation consisted of about two minutes of explanation of how the food distribution worked, followed by a slogan we heard more than once that day: “the only way to do this wrong is to not have fun!”

The message there is as intentional as it is informal.  The heart of the ministry isn’t in the food it hands out, though everyone knows what this food means to the people who receive it.  The ministry is about giving hope and respect as much as it is about food.  The attitude of the volunteers is essential, and it was contagious.

In the brief moments of conversation I was able to have with Max in the midst of everything going on that morning, this was a refrain I heard over and over from him.  There were probably easier ways to do things.  Ways that would streamline the process, make things go faster.  But at Despensa, it’s the person to person contact, the time deliberately taken to create interactions that matters.  They call it the ‘friction’ in the process of distributing food that allows people to get to know each other, to share a smile, to share about their week and have the dignity of choices.

I noted with no small degree of pleasure that one of our oldest volunteers who had come with us had immediately gotten into the spirit of things.  Her mobility didn’t allow her to join us as ‘runners’, so she sat for a time with one of the women who was greeting guests and registering volunteers.  Then she just started walking around the waiting area, introducing herself and getting to know people, hearing their stories, smiling over the strollers and young children.  Another of our volunteers got to know a Burmese family who were handing out cookies and hot chocolate from a small kitchen off to the side of the waiting area.

The rest of us ‘runners’ hung out in the middle of the room.  As guests completed the registration process, we walked with them to a long hallway where the food distribution took place.  Lengthwise down the middle of the hallway, racks were stocked with food in different general categories.  Each rack had a piece of paper indicating how many items could be chosen based on family size.  Our job was to fill the carts with the items guests chose from among each rack.  In the process, we had the opportunity to get to know one another.  Some guests had been coming for a long time, others were new.  It didn’t take long to make the trip down the hallway, but as we went, more often than not we had good conversations – about the Christmas season, about family, favorite dishes, or even commiserating about this or that.

The time flew by – until finally all the guests had been served, the area swept and cleaned, but the day wasn’t over.  All through the frenetic pace of the morning, the volunteers had worked side by side, without really knowing much about each other or who was who.  Now we gathered together to introduce ourselves, to tell the stories of our experience that morning, and in so doing, often naming where we’d seen God at work.

In a subtle subversive way, this was church.  Neighborhood residents and college professors, youth from the suburbs and youth from the streets, Burmese refugees alongside elderly church ladies.  We didn’t know who was who until the end of the day.   Max stood back as another leader brought everyone together, and invited all the first timers to stand and introduce themselves.  As we told our stories, he sometimes made observations about the things we’d noticed.  Sometimes he asked questions, or invited others in the group to connect to what had been said.  Without saying as much, this was the discipleship – the moment where volunteering became more than volunteering.  Where people were invited to see their service in the context of something much bigger.  Kingdom eyes were being developed here, and it happened as everyone contributed.  A young man was sitting in the corner, a bit distant after having needed to be coached a bit on appropriate interactions with another volunteer.  But when one of the group named a moment this young man had gone out of his way to help a guest, a half-smile played across his face.  Small steps, little interactions over time, building a different vision of what it’s about.