ABCUSA > In the Spotlight > My Baptist Life: Curtis Ramsey-Lucas

Curtis Ramsey-Lucas, 49, of Hyattsville, Md. serves American Baptist Home Mission Societies as executive editor of Christian Citizen magazine and has been involved for many years in advocacy ministry in Washington, D.C. He coordinates the Interfaith Disability Advocacy Coalition, a program of the American Association of People with Disabilities (AAPD). A member of University Baptist Church in College Park, Md., he has taught a children’s Sunday School class for many years and has assisted the congregation with its social media ministry. He and his wife, Carol, chief of chaplains at the Washington, D.C., Veterans Administration Medical Center, are parents of four boys ranging in age from first grade to a freshman in college. He is a “sometime songwriter” who enjoys making music with others. 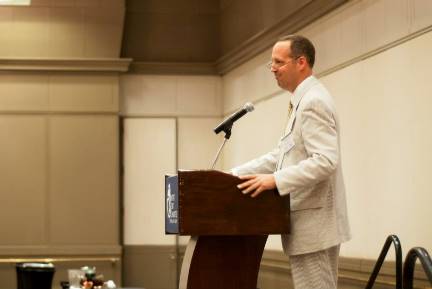 I’m an American Baptist because of our commitment to freedom and justice for all people and for the ways we have lived out those commitments historically through our domestic and foreign mission efforts as well as through the ministry of the local church.

I received the gift of faith from my mother, who made sure my brother, sister and I were in church most Sundays when I was growing up and who was deeply committed, along with my father, to community ministry – what some today would call mission on our doorstep.

My first experience with the church that I remember is Sunday School and of a young woman who taught us hymns and children’s songs of faith. I remember in the fellowship hall of our church there were three rectangular colored windows in various shades of red, orange and yellow. I can distinctly recall listening to her sing with the sun coming through casting beautiful colors on the wood floor.

I believe the greatest challenge facing the church today is the context it is a part of – a fast-paced, distracted, busy world in which the church competes with people’s other responsibilities, commitments, and even opportunities to give and serve.

I pray for my family, for my children especially, that they will grow in wisdom, understanding and faith. I pray that I will be able to discern and, more importantly, follow God’s will in my own life. I pray for forgiveness when I come up short, which, of course, is often. I once wrote a song in which I wrote, “Jesus, my Jesus, I am out here all alone. Jesus, my Jesus, on a borrowed prayer and a song.” I pray and sing many borrowed prayers and songs as well as some of my own.

I struggle the most, as a father of four boys, with making time to be still with God. When I am honest with myself I recognize that was also a struggle before I became a father.

I am most passionate about the opportunity I’ve had to work with people from a variety of faith traditions – Christian, Jewish, Muslim, Hindu and Sikh – to advocate for inclusion of people with disabilities in congregational life and for greater opportunity for people with disabilities in our society. When George H.W. Bush signed the Americans with Disabilities Act in 1990 he said, “Let the shameful wall of exclusion finally come tumbling down.” And so it has. Our society is more open and accessible to people with disabilities than ever before, and yet debris from that wall still blocks the path of access to opportunity for too many. Persons with disabilities in the United States are more than twice as likely to be impoverished  and unemployed as non-disabled individuals; a reflection of continuing discrimination in such areas as employment, transportation and education. And while many congregations have worked to make their buildings accessible, others have not.

I think that 10 years from now the church will continue to experience new life. When I was in theological school in Boston in the early 1990s there was a fair amount of talk about the decline of the church in the city and region. But if you looked more closely, the church was actually thriving. While membership in many of the mainline or old-line congregations was declining there was growth and vitality within newer communities of faith, including among more recent immigrant communities. So while there was decline from one point of view there was new life from another. I think the same will be true with the church of the future. The church will grow as the spirit moves and as the church is open to the movement of the spirit. The church will grow as it meets the needs of the people for justice, mercy, grace and peace.