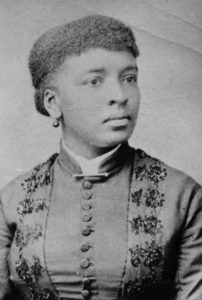 Appointed to service January 10, 1886, Lulu Cecilia Fleming, M.D., was the first African American to be appointed for career missionary service by the Woman’s American Baptist Foreign Missionary Society. She was assigned to Palabala, Congo (now Zaire).

Fleming was born January 28, 1862, in Hibernia, Fla. Her father was a slave. When Fleming was six weeks old, her father decided to join the Civil War. He and other fugitives were gathered by the captain of a Union gunboat, who had himself deserted from the Confederate army. Her father’s freedom was short-lived. The gunboat captain deserted the Union, and the fugitives ended up prisoners in a Jacksonville, Fla. jail. Some were hanged. Lulu’s father was later released from imprisonment and joined the Union army. He died without ever seeing his family again.

Up to age 15, Fleming’s life was like that of many poor slave children. Her mother, a woman of no education, was deeply concerned for the welfare of her children. In 1876, Fleming was converted. “I was a missionary like Andrew of old,” she later wrote, “from the very day I found the Lord.”

Fleming became a public school teacher in St. Augustine, Fla. A pastor from Brooklyn, N.Y. who she encountered in Florida became impressed by the way she was teaching a “Sabbath-school class,” which included the pastor and licensed members of his church. The pastor offered to help her attend college. He gathered a group of women from his congregation to encourage and support Lulu to attend Shaw College in Raleigh, N.C. In May 1885, she graduated from the “Estey Seminary Course” of Shaw as class valedictorian.

Returning to Florida, Fleming found that “the Lord had need of me in Africa.”

The Woman’s Baptist Foreign Mission Society of the West, an auxiliary of the Baptist Missionary Union, had heard of her and in 1886 wrote her asking her to become their first missionary representative to the Congo. On her way to Africa she wrote of that invitation, “I was truly happy then, and since I have set sail for the benighted country I am happier; when I reach the doleful shores I will be happiest.”

She reached Palabala, Congo, on May 23, 1887. During her first term of service she was matron for the “station girls” and a teacher in schools. She longed, however, for other contacts. In 1887 she wrote, “I am confined to the station, to my girls work, too closely to be permitted to get to the towns during the week but go each Sabbath twice…I go round to the near towns to invite and persuade people to come to our Sunday service. In the afternoon I go with some of the evangelists.”

In another report, she lamented that “All of our converts thus far are men. Oh how I long to see the women reached.” She prayed for another missionary that she might be “free to do town and jungle work.” The women, she wrote, “must be reached in their homes.”

Fleming appealed to the board to allow her to “stay out five years,” noting that “No Lady has ever stayed out so long, but I am sure it can be done. I have only begun my real work.” Illness, however, forced an earlier return, a decision she accepted only because 10 ill missionaries had died between 1887 and 1891 on their way home “because they waited too late.” As she prepared for furlough, she wrote that she hoped “to be allowed two years home in which to study medicine, so as to be able to help these suffering people.”

Returning to America in 1891, she engaged in medical studies at Women’s Medical College of Philadelphia and graduated as a physician. While in Philadelphia she joined and was a popular speaker at Bethel Church.

She was forced to remain in the U.S. until 1895 due to lack of funds for her return. Grace Baptist Church of Philadelphia, Rev. R.G. Conwell, pastor, undertook her support.

During Fleming’s second term, she served at Irebo in Upper Congo as a medical missionary, and when that station was closed, at Bolengi. During that time she married “Tata” (the Rev. Mr.) James of the Ikon Station, but the records tell little of their marriage.

Stricken with African “sleeping sickness” before the end of her second term, she reluctantly returned to the U.S. for treatment, anticipating that once restored to health she could return to the Congo. However, she died June 20, 1899 at the Samaritan Hospital in Philadelphia. She is buried in Mt. Zion Cemetery in Philadelphia.

In an editorial in Baptist Missionary Magazine shortly after her death it was said that “Dr. Fleming was a woman of strong characteristics and fitted to overcome the many obstacles encountered in missionary work…She was particularly successful in winning the hearts of the Congo people, putting herself in close touch and sympathy with them.”