ABCUSA > In the Spotlight > Remembering 9/11

Cheryl Dudley is Region Executive Minister for American Baptist Churches of Metro New York. She submitted her reflection to recall the 15th anniversary of the 9/11 attacks.

New York has always been a refuge for a wide expanse of humanity, made up of people who have come from different parts of the world and our nation, as well as those whose families have long lived in the great City of New York. Somehow, the city has maintained the miracle of coexistence – living side by side, block by block, and borough to borough with so many diverse “others” as neighbors. 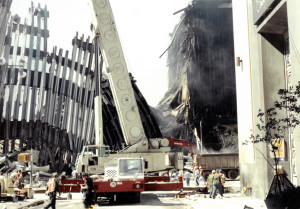 New York’s innocence was lost on September 11, 2001 because of an attack from an external enemy. This so called loss of innocence is ironic in a city whose residents are characteristically watchful, suspicious and not usually flummoxed because those who live in New York City have essentially seen just about everything.

When any significant life event happens, the details of its unfolding seem to be captured in our memories like a photograph. The September 11, 2001, attacks, known as 9/11, became a day that jolted our lives, confronted our assumptions about our relative security, and raised the enduring question anew, “Who is my neighbor and who are our neighbors?”

I was not a New Yorker then. Instead, I lived near Valley Forge, and was a part of American Baptist Home Ministries (ABHMS — then known as National Ministries) staff. On that particular morning, I was nestled in a room reviewing a video when the news broke of the World Trade Center twin towers being hit by airplanes.  As if that news wasn’t enough, we were startled further to hear that the Pentagon was also targeted, and a site in Pennsylvania cradled the wreckage of yet another airplane apparently hijacked for use as a missile.  My first thoughts went to city friends, including ABC Metro New York staff colleagues. Like many other people, I tried to make contact with persons I knew who were important to me living in the New York City area.  My initial calls did not connect, but I was grateful in the days that followed to learn of the physical safety of ABCMNY staff colleagues, and the safe condition of churches in the region. Little did I know that 15 years later, I would be the executive minister of the American Baptist churches in this great, complex, challenging, and unrelenting city that is persistent in faith, untiring in life, uncompromising in diversity and insistent on justice. I am resolutely a New Yorker now.

Rev. Peter Loew, who is part of the ABCMNY ministry staff, reflects on the Tribeca Spiritual Center that was located in the downtown area near the World Trade Center. It was a new church plant at the time, and had begun with a first worship service on Easter Sunday 2001. Shortly after the 9/11 attacks, the church had as a part of its worship service, a baby dedication that encouraged the congregation as well as the community that out of the ashes of ground zero, life, despite devastation, goes on. The Tribeca Spiritual Center had to move a couple of times in the months that followed in order to secure a safe and accessible worship place for its attendees. It had difficulty finding its footing again.  Attendees, who lived in the surrounding neighborhoods, lives were overturned too and the Tribeca Spiritual Center eventually stopped meeting.  Mariners Temple Baptist Church, pastored by Rev. Dr. Henrietta Carter, was also located in the area near ground zero. The streets leading to the church were blockaded – a necessary civic precaution but an impediment to Mariner’s members, friends and seekers who needed and wanted to access the church facility for refuge and strength. Mariners weathered the storm and continues to serve faithful people today.  In addition to these two congregations, the reality was that in virtually every corner of the New York metropolitan area, everyone knew of someone who died or was injured in the 9/11 attacks.

One memory that I have of that day as an outsider at the time was watching the response of some of my colleague-friends from New York. They were devastated and desperate to get back home to New York and frantically calling family members and friends to see if they were alright. I remember one colleague’s knees hitting the floor in prayer, pleading for grace and mercy from God with all of her heart for those she loved who live there, as well as the city as a whole. New Yorkers can be typecast and dehumanized: too often seen by those who don’t really know New Yorkers as tough cookies, railroading their way through life no matter what. The soft underbellies of New Yorkers are not usually exposed. The city is unique among the great cities in our country and the world; and one doesn’t often see the softer edges until you are in the midst of it. When I moved to New York for another ministry in 2006, I remember that it was about six months into my new life here that I stopped seeing New Yorkers as New Yorkers, but saw them simply as just people — pure and simple.

ABCMNY Associate Executive Minister, Dr. Campbell Singleton describes that time 15 years ago this way: “Grief, sorrow, pain, yet surprising intimacy and closeness was evident among New Yorkers, like never before. For the first time, I experienced a real sense of community, where neighborhoods, ecumenical and interfaith communities were working together with purpose — real purpose. We found that God dwells even where the shadow of death lingers.”

And so we picked ourselves up, brushed off 9/11’s considerable dust, cleared our lungs and breathed. New Yorkers are proud that we have been able to do that. We have faced other issues since then that threaten to chip away at our collective since of community, but we keep living. Doing as Luke 31 warns, we  watch and pray; keeping a look out for the enemies that may loom from without, as well as those who hover nearby over seemingly friendly spaces. Nevertheless, it is not the wiles of the enemy that motivate those who seek to be faithful, it is the call to love the One who created every last one of us with our whole selves, and the command to love our neighbor as much as we love ourselves. Yet the call does not stop there, it includes loving our enemies and praying for those who persecute us. In so doing, we do it even for ourselves.