At the age of 19 in 1989, Luminitza Cristescu was imprisoned in her native Romania for protesting with hundreds of others the mistreatment of Rev. Laszlo Tokes, the figurehead of the rapidly unfolding and bloody Romanian revolution, leading to the overthrow of the communist Ceausescu regime. 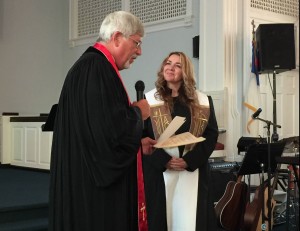 Today, Luminitza Nichols (her married name), 46, has achieved a lifelong dream she could never have imagined in her darkest days in Romania. On August 7 she was ordained an American Baptist pastor. The ceremony took place at the Baptist Church of West Chester, Penn., where Nichols now serves as associate pastor of Pastoral Care. “Women were never allowed to serve as pastors in Romania,” she explains. Nichols is believed to be the first native-born Romanian woman to serve as an ordained Baptist minister anywhere in the world.

Flash back 27 years. Arrested with others on the streets in her home of Timisoara in western Romania, where Tokes served as a pastor, Nichols was thrown into a dark, narrow, maximum-security cell for dangerous dissident criminals, where she found herself with 19 other women. The cell contained two bunkbeds, a bench, a small bathroom and one sink. When guards asked the prisoners if any of them was a Christian, Nichols was the only one who raised her hand – against the advice of the other prisoners. “You could be killed,” they told her. Indeed, her execution seemed likely. “But I refused to be ashamed of Christ,” she recalls. “I wanted to honor God.”

Then Nichols watched as guards led her cellmates away one at a time and severely tortured them before returning them to the cell. “The guards wore heavy boots,” she remembers, “and they liked to kick prisoners relentlessly in the kidneys.” The cell was so tiny, Luminitza explains, “that we had to sleep on top of each other. For some reason I was never interrogated,” Nichols says. “No one ever laid a finger on me.”

Unexpectedly, after five days in prison, Nichols and her cellmates were freed by the Romanian government just before Christmas in 1989. She found her way home through ravaged streets filled with burned buildings. “When I got home, my parents were crying in the kitchen,” she recalls. “They never expected to see me again.” 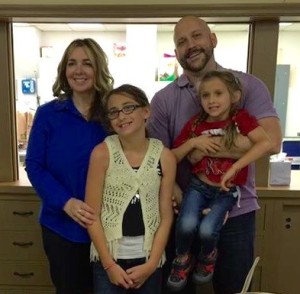 Eight months later, in August 1990, Nichols was on her way to the U.S. from Romania with a student visa to study at Tennessee Temple University (the school has since closed). She met her husband, Eric Nichols, in Tennessee. He and Luminitza have two daughters, Ana, 11, and Teodora, 6. After working in Tennessee for 10 years as a nurse, Luminitza and Eric decided to move to Pennsylvania “to see what another part of the country is like.” Eric became an aerospace engineer at Boeing Rotorcraft Systems in Ridley Park, Penn.  Nichols began to pursue her dream to become a pastor by studying six years for an MDiv. degree at Palmer Seminary. She also became a U.S. citizen.

“Christians must never let the culture define their beliefs,” she says. “To compromise is a danger to the church.” She says the church can remain united despite attempts at splintering over issues involving racism or the variety of political positions believers will hold. “Suffering can be good for the church,” she says. “The freedom we have in America is so precious.”

Among the officiants at the ordination service were Rev. Dr. Frank Frischkorn, the regional executive pastor for American Baptist Churches of Pennsylvania and Delaware (ABCOPAD) and Rev. Dr. Kevin Walden, ABCOPAD’s regional pastor with Pastoral Leaders. Frischkorn presided and Walden presented Nichols with a clergy stole and anointed her with oil.

“Ordination ceremonies have always been a joy to me,” Frischkorn says. “As God continues to raise up new pastoral leaders to serve His Church, these services provide a beautiful affirmation that we still have an exciting future before us as the Church of Jesus Christ! Lumi’s call to ministry and her ordination provided the added blessing of seeing our God do a ‘new’ thing in the work of His Kingdom – what a privilege to be a part of that! I’m excited to see how the Lord will use this special servant in the days to come!”

“Rev. Luminitza Nichols’ story highlights the many ways God calls and gifts women in ministry,” says Rev. Dr. Patricia Hernandez, national director for American Baptist Women in Ministry. “It is a joy to welcome Lumi into our ABC life. As we look to the future, it will be women like Lumi who will lead us into a new day.”

A charge to Luminitza, a highlight of the ordination ceremony, was delivered by Dr. George Hancock-Stefan, also a Romanian and a Baptist, and among her professors at Palmer Seminary. Hancock-Stefan said in part:

“From the moment that I received your invitation two images kept moving in my head. One is a famous painting by Constantin Daniel Rosenthal entitled Romania Revolutionara painted during the great Romanian revolution of the 19th century. Rosenthal participated in that revolution, and you participated in the great revolution of the 20th century. Like Rosenthal, you have experienced the Romanian jails.  Out of those experiences, Rosenthal painted that famous painting which became the symbol of the Romanian nation looking for the days when we will be a free nation. Out of your jail experience you have become a fearless person in the service of the Lord Jesus Christ and your testimony has stirred the hearts of many people to become more committed to the Lord Jesus Christ.”