ABCUSA > In the Spotlight > Changing Lives in Oswego, NY: A Matthew 25 Grant is Helping Cabin 3-Outpost Bring Hope to Hundreds 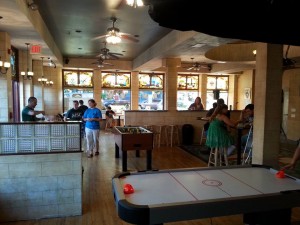 Imagine yourself a man in your mid-20s in Oswego, N.Y. You’ve quit school and become involved with alcohol and drug abuse and been in legal trouble. You’re on a road to self-destruction.

Now, imagine your life dramatically changed, thanks in part to a Matthew 25 Grant and an initiative called “Cabin 3-Outpost,” located in downtown Oswego, a college town of 20,000 along the shores of Lake Ontario. The Outpost is located in a neighborhood with about 20 bars, several tattoo parlors and a strip club. In the midst of his struggles the desperate mid-20s man came to the Outpost, an organization open several nights a week, with a mission to offer impoverished people of all ages food, clothing, and a safe, Christian environment. Cabin 3-Outpost is an initiative of God’s Vision Christian Church, an American Baptist Churches USA (ABCUSA) congregation in Hannibal, N.Y.

Today, the 20s-something man, thanks to the Outpost, has received support to study for his Graduate Equivalency Diploma (GED), has found a job and an apartment and has plans to start his own landscaping business, explains Erik Svereika, an Outpost leader. “He couldn’t believe we were offering him not only food and drink, but also a Bible, a Christian necklace and a welcoming place to hang out. He couldn’t believe we wanted to spend time with him. He ended up coming every night we are open, helps to clean the Outpost and hands out food and water to people in need. He’s become a friend and has accepted Jesus Christ. Now he has a future.”

“The people who come to us are of all ages,” Svereika explains. “They are families and single people, recently divorced people, college students, homeless folks. We’ve had all sorts of drug addicts, cross-dressers, folks with addictions that were impoverishing them. Through love, understanding and resources, including the $1,500 Matthew 25 Grant received in 2015, we were able to help them realize what changes were needed.” According to Svereika, the grant made it possible to not only be there for people in need, but also to buy and hand out cases of water, cereal, nuts, fruits and vegetables and clothing like hats, gloves, coats and boots. “We could provide spiritual nourishment too,” Svereika added. “We’ve had homeless people accept Christ and as a result vow to make changes in their lives. We have been ‘teaching people to fish’ so they can get help and make it on their own.”

The Matthew 25 Grant initiative, sponsored by ABCUSA and the Board of General Ministries, is funded by a generous, anonymous donor whose goal is to help meet the needs of “housing, feeding, education and health with regard to the less fortunate.” In Fall 2015, a total of 69 applicants received funding ranging from $500 to $5,000 with a total awarded of $169,140. Grant applications are welcomed once annually by September 1 with the only requirement being an ABCUSA connection.

The Outpost features Christian music each night. “We’ve had people come in who are questioning their sexual identity and who are running from the law,” Svereika explains. “The most typical person who comes to us has never held a Bible, never been to church and never before heard the Good News. There have also been many who were somehow hurt by a church and said they would never go back. Some believed themselves hated by Christians and not worthy of God, but they have come to love the Outpost and become open to Christ and biblical teachings.

“By simply doing what we have felt God is telling us to do we have been able to point countless folks to Christ and help feed and clothe and give hope to impoverished and needy people,” Svereika concludes. “God’s ways are amazing!”