When Kenneth C. Marsenburg, Jr., accepted an invitation in 2013 to serve as Director of Development for American Baptist Churches USA (ABCUSA), he said it felt like he was “coming home again.”

“I was here (in Valley Forge) from 1986 to 1988 as a consultant, hired to support a mission initiative to raise funds for new church starts, world mission and for underwriting the Green Lake (Wis.) Conference Center,” Marsenburg recalls.

That was close to the outset of his career. Over the years Marsenburg, now in his mid-60s, has played a pivotal role in raising more than $760 million for 35 organizations, including Roman Catholic Dioceses and Archdioceses, colleges and universities and hospitals. He has advised hundreds of congregations and related faith-based organizations, including the raising of $2.1 million for the congregation he calls home, Pinn Memorial Baptist Church in Philadelphia, Penn. Most of the campaigns (annual appeal, capital, endowment and stewardship) he has led have surpassed their original fundraising goals. 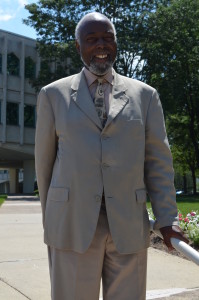 Now, Marsenburg is considerably focused on ABCUSA’s “Transformed by the Spirit,” a campaign begun in 2011 to organize and fund a “spiritual journey to discover where God is taking the denomination as its believers seek to serve as the hands and feet of Christ” in today’s challenging times. Transformed by the Spirit had an original goal to raise $800,000 to make an “impactful” difference for those served and serving in ABCUSA’s 5,200 churches and 33 regions. Transformed by the Spirit since 2011 has increased its financial goal, intending now to raise $1.2 million in trying to support “the denomination, regions and local churches,” Marsenburg explains. So far about $950,000 has been raised toward that challenge goal. Marsenburg is a major relationship-building force throughout the church.

His career has been a calling from God. “I believe each of us, in our own context, has times in our lives where our proportional giving or sacrifice can mean making a difference in individual lives locally, nationally or globally,” Marsenburg says. When he has the opportunity to meet with individuals, Marsenburg often encourages them to especially think about those two or three causes that most matter to them to support annually.

“Proportional giving can bring about the transformation of someone’s heart and mind,” he says. “Giving not only enriches the recipients of gifts, making a difference in their lives, but giving also brightens and makes more meaningful the lives of the donors.”

Marsenburg, who is affable and fun to be around, has a ready smile and clearly enjoys the company of others. He is on the road some 150 days a year visiting individuals, congregations and regions. “I am grateful to pastors who often play an important role in opening up to me the doors of people they know,” he says. “My visiting is never complete,” Marsenburg explains. So far in three years he has visited individuals in Massachusetts, New York, Rhode Island, Florida, Georgia, Ohio, Michigan, Indiana, Illinois, West Virginia, Virginia, the District of Columbia, New Jersey, Colorado, Missouri, Wisconsin, Oregon, Washington, California, South Dakota and Kansas.

His chief goal is to cultivate a sense of advocacy, leading to support of the denomination’s Office of the General Secretary and hope for many inspirational missional programs throughout ABCUSA. “I help people to prioritize their goals and wishes that are carried out by ABCUSA,” he says. It is important to note, however, that Marsenburg is more than a fund-raiser. “I advise people on the challenges those in need face in their lives, on the challenges congregations face in these times,” Marsenburg explains. “It is important for the people I visit to see the Development Office as a resource for them to better deal with whatever they are facing. I try to help people build greater capacity for what they are trying to accomplish through their faith and altruistic ideals.”

For Marsenburg, a key passage in Scripture is Luke 12:48: “To whom much is given much is required.” “I find that today people want to give to something that makes a difference in the lives of people,” Marsenburg says. “They want it clearly conveyed to them the impact and difference a gift of their dollars will make.” He adds, paraphrasing Billy Graham, that if you want to know the depth of a believer’s faith, “take a look at their checkbook.” He notes that if followers of Christ were truly strong advocates of the words conveyed to them when they study their faith “there would be no need for special campaigns.” American Baptists and other mainline denominations practice a giving level of 2-3 percent, Marsenburg says.

Key to enabling Marsenburg to get around and accomplish what he does is the built-in “capacity” afforded to him by Evon Moody, assistant to the Development Director. “Evon helps me so much with such tasks as acknowledging people’s generosity and with the Development Advisory Team, chaired by David Gnirk, and I am very grateful to her,” he says.

Those individuals Marsenburg meets react to him in various ways. “Some are warm. Some are reserved,” he says. “Others are curious about the difference a gift could make that they could provide. Not all understand how collectively the gifts that donors can make can impact the greater good of God’s kingdom. Some have misperceptions about the denomination and how it works.” Donors to ABCUSA reflect the incredibly diverse multicultural spectrum of the denomination, he says, including African Americans, Asians, Caucasian and Hispanic benefactors.

Marsenburg says the “graying” of America is having an impact on the world of philanthropy in general and our churches in particular. “Many organizations, including churches, are dealing with the loss through death and attrition of older donors,” he says. “Millennials and boomers may have different ideas about their approaches to giving, but the key to engaging any generation is building both awareness and engagement. That can take some time.”

He tells the story of a younger couple, in their 30s,that he met with. “They decided that making a $5,000 gift over five years in support of both community and denominational priorities was more important to them now than the purchase of new dining room furniture,” he says.

Marsenburg holds a B.S. degree in Accounting and Finance from Central State University in Wilberforce, Ohio. “I’m a preacher’s kid,” he says. In his early career, he served the Opportunities Industrialization Centers (OIC) in Ohio (known as OIC of America) with grant writing, program development and government funding. That vocational development and training network, developed by the late Rev. Dr. Leon Sullivan, had more than 120 chapters nationally and has been a powerful educational and jobs initiative on behalf of disadvantaged adults and youth over many decades. His current pastor at Pinn Church, the Rev. Dr. Jacob L. Chapman, was also his pastor in Ohio in those early days at St. John Mission Baptist Church in Springfield.

The ABCUSA Development Director and his wife, Cora, have been married 36 years. They have an adult daughter, Theresa Jones, a television producer in Florida, and two grandchildren. Ken Marsenburg can be reached by calling (800) ABC-3USA extension 2106 or through email at Ken.Marsenburg@abc-usa.org.