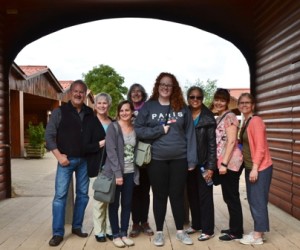 “My time in Taize in June was a profound experience both spiritually and interculturally,” explains Rev. Judith Fackenthal, president of American Baptist Churches USA (ABCUSA) and pastor of Garfield Park Baptist Church in Indianapolis, Ind.

Before going to Taize I thought it was all about contemplative music and prayer practice,” Fackenthal says. “The root of the Taize Community is reconciliation and peace between the people of the world. It was a wonderful time of Bible study and small group participation.” Fackenthal’s small group featured participants from the Netherlands, the United Kingdom and the U.S.

The Taize Community is located in France’s Burgundy Province. It was founded in the late 1930s by Brother Roger to be an ecumenical community of reconciliation. Taize Monastic leaders are from all walks of the Christian faith. Brothers of the order lead Bible study, share an introductory time and teach daily. Taize features prayer times, the reading of scripture as well as small group conversation.

“The experience truly sinks into your soul and spirit,” Fackenthal explains. “You become ready to receive God. All of us from 25 countries sang in different languages, rarely in English. I was moved to see so many young people aged 16 to their late 20s on their knees with their faces to the floor in prayer time. It was such a picture of hope.” And Fackenthal got to share the whole experience with her daughter, Kathryn, 31, a nurse living in California.

Fackenthal’s experience was very much in keeping with a key, current ABCUSA initiative entitled “Rhythms of the Spirit.” Rhythms of the Spirit is about “creating an expansive place necessary to hear God’s voice,” explains Brad Berglund, spiritual director for ABCUSA.

The emphasis is designed to deepen the spiritual commitment of American Baptists. “It really is necessary for all American Baptists as part of practicing their faith to listen deeply to God in order to do what God is asking of us,” Fackenthal says. “Only when we listen deeply can we move our own personal issues and agendas out of the way so we listen to what God is calling us to do.”  And that deep listening can also help churches respond to the turmoil in the world by doing a better job of moving beyond their walls into the community around them, she says.

The June week Fackenthal and her daughter were in Taize was a “small” week, she says. “When colleges and universities are not in session during July and August about 3,000 people a week come to Taize to reconnect with their spiritual lives and engage in Bible study,” she explains. Nations represented the week of Fackenthal’s attendance included, in addition to the U.S., Canada, France, Belgium, England, Scotland, Ireland, Singapore, a number of African countries, Germany, Egypt, Poland and Croatia.

“Most nations of the world are in turmoil,” Fackenthal says. “We gathered three times a day to pray for the world and seek God’s wisdom. The focus this year is on mercy. And so we talked about what mercy means and what it means to be merciful today.” Many conversations centered on refugee work globally and what it means today to share grace and compassion with others. 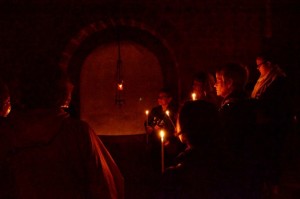 Candle-lit journey in the crypt at Chartres Cathedral

As Fackenthal notes, the small group discussion focused on concerns all too familiar to Americans. “I found people from other countries highly intrigued about what is happening in the U.S.,” she says. “It gave me a real sense of humility. I became more aware of how all countries are struggling. I realized how we have to pay attention to what is going on globally. We are all in this together.”

“ A lot of people think that concerns of the Taize community are limited to the contemplative practices of prayer, silence, and singing, but it is not only that,” Fackenthal says. “The practices are a means for opening our hearts to being active in doing ministry and being called into the world.”

Since Taize, Fackenthal explains she feels “less anxiety and more of a deep heart desire to make a difference and be a voice of hope in the turmoil we can face in our culture.”

One way Fackenthal will be striving to make a difference is being part of an initiative Taize Brother Emile will be a part of over the Memorial Day holiday in 2017 in St. Louis. “He will be engaged in reconciliation work there as a response to the tensions arising out of Ferguson,” Fackenthal says. This Fall, Brother Emile is coming to Indianapolis to work with Fackenthal on how congregations there might join in the St. Louis event.

Fackenthal’s Taize experience is also adding perspective to her work as president of ABCUSA. “It has helped to ground me and give me a centered place for my leadership at a time of great transition in our denomination,” she says.

Taize welcomes Christians from all walks of life to visit the community. The order focuses especially on older teens and young adults. But you don’t have to go all the way to Taize to deepen your spiritual life. Rhythms of the Spirit runs special events to help you grow a spiritual focus. Check out Rhythms of the Spirit on the web at http://www.rhythmsofthespirit.com/.