$1,000 Matthew 25 Grant Gets Garden-Fresh Vegetables to Tables of the Needy in Illinois

ABCUSA > In the Spotlight > $1,000 Matthew 25 Grant Gets Garden-Fresh Vegetables to Tables of the Needy in Illinois

A $1,000 Matthew 25 Grant from the American Baptist Churches USA (ABCUSA) to The South Church in Mount Prospect, Ill., played a significant role in getting fresh vegetables onto the tables of people in need last year.

The South Church Garden yielded 2,150 pounds of vegetables in 2015, the third time in seven years that more than a ton of vegetables was harvested.

“The grant gave us the opportunity to pay for having the garden (on the church property) tilled this spring,” says Pastor Rick Kesler of the 2015 growing season. “It had not been done in three years. The grant also helped us purchase a raised bed, so that people who can no longer get down on their needs to garden can be part of the growing process.” The church also used the grant to purchase a cold frame assembled late in the growing season and to be used for the first time in 2016.

“Using the cold frame we should be able to plant some seeds or plants early in the growing season and perhaps extend the season into the fall,” Kesler says.

Members of an associated Burmese congregation helped with the garden, and students from a Montessori School that meets in the church also participated. 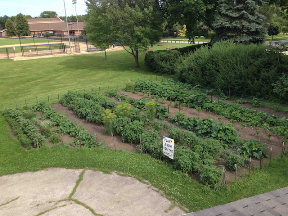 Kesler says the weather was unique in 2015. “We had a cold start, too much rain and then not enough rain,” he says. “Our rain collection and solar powered pumping system came through for us again and kept everything sufficiently watered during the dry spells.”

The church divided the produce between two agencies – Northwest Compass and the Village of Mount Prospect, the pastor says. “Both organizations distribute food to the needy in our community,” he says.

“We’re so grateful for the Matthew 25 Grant,” Kesler concludes. “Without it we could not have achieved our gardening goals.”

The Matthew 25 Grant initiative, sponsored by American Baptist Churches USA (ABCUSA) and the Board of General Ministries, is funded by a generous, anonymous donor whose goal is to help meet the needs of “housing, feeding, education and health with regard to the less fortunate.” In Fall 2015, a total of 69 applicants received funding ranging from $500 to $5,000 with a total awarded of $169,140. Grant applications are welcomed once annually by September 1 with the only requirement being an ABCUSA connection.