VALLEY FORGE, PA (9/10/15)—On September 2, 2015, a delegation of the Kachin Baptist Convention (KBC), Burma, led by General Secretary Dr. Samson Hkalam, visited the Mission Center.   The visit focused on relationship building, as the delegation made its way to attend an annual youth conference in Jacksonville, Florida, organized by the newly established Kachin Baptist Churches USA in the United States.

Dr. Samson Hkalam gave an update to attendees on the situation of the internal displaced people’s camps in the Kachin State, saying that there is more military presence at the camps and villagers are still being displaced as fighting between the military and the Kachin Independence Army (KIA) continues. He expressed concerns as humanitarian efforts provided by the international non-governmental organizations (INGOs) are decreasing and will end in October 2015.   Many people have died due to infectious diseases and other health reasons.   A report compiled by KBC and nine NGOs was distributed at the meeting.

He also spoke about the murder case of two KBC Sunday School teachers, by saying that the Convention wanted to launch an independent investigation but has not yet received approval from the government.   In spite of the request made to the government officials in February by Medley and an ABC delegation when they visited the office, there has been no follow up of the investigation.   Medley encouraged Dr. Samson to continue to work on this justice issue.

Drug issues and trafficking are also a growing problem in the country.  Adults as well as youth and young adults have fallen into drug addiction which has become a big concern for the convention.   Many local farmers are lured to grow opium for high profitable drug traffickers.   Church leaders galvanized protest movements and confiscated the crops and turned them over to the authorities.  However, corruption exists between the authorities and drug traffickers, which makes protesting activities very difficult. 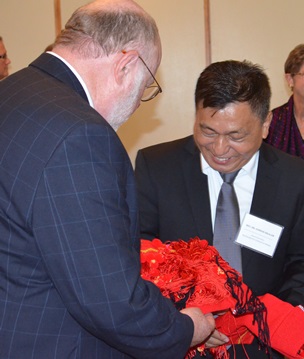 The final update given by Dr. Samson Hkalam was on the progress of the National Ceasefire Agreement (NCA). If this agreement is not reached, there could be an impact on the national election in November 2015.   Prayers were requested for the ongoing talks involved.

The Kachin Baptist Churches USA expressed their strong desire to become more closely aligned with ABC as an associated ministry organization.   They learned more about the procedure and will follow up with the Burma Refugees Commission.   The visit ended with a luncheon and gift exchange. 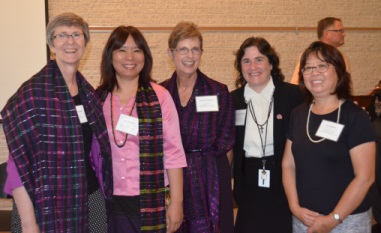 American Baptist Churches is one of the most diverse Christian denominations today, with more than 5,200 local congregations comprised of 1.3 million members, across the United States and Puerto Rico, all engaged in God’s mission around the world.