“We Hired Youth – and They Did the Rest”
Transformed by the Spirit – Ministry Story Opportunity
The Community Ministry program at Judson Memorial Church, NYC
How it began:  When the Rev. Dr. Donna Schaper was called as Pastor at Judson Memorial Church in the Greenwich Village neighborhood of New York City in 2006, the active congregation was down to about 75, and the church could only afford to hire one minister.  Since Judson’s long-time vision of its mission – and assignment to its clergy – has been to serve both the congregation’s pastoral needs and also to take an active leadership role in external social justice ministries, Rev. Schaper felt she could not effectively handle everything expected of her without some additional staff help.

In reviewing the church’s resources, Rev. Schaper and the Board noticed that there was a small  restricted fund donated many years earlier for a program that no longer existed, that was just sitting in the bank.  Rev. Schaper suggested asking the donor if it could be spent on a new program to train seminarians from the City’s several theological schools – future pastors – in how to do “public ministry.”  By that, she meant the simultaneous and intertwined conducting of internal and external ministry – a combination not taught in seminaries, but a set of skills in which Rev. Schaper and Judson church both had long experience.  The Board assigned one of its members to convene an Advisory Group to develop the idea; the donor consented; and a position was advertised. 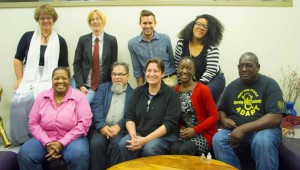 Five well-qualified applicants appeared and were interviewed by Rev. Schaper and the Advisory Group.  When they couldn’t decide which one to hire, Rev. Schaper joked that maybe they should just hire all five!  To her surprise and delight, the Advisory Group and then the Board agreed to take the risk of spending the whole fund in the first year, in faith that future funding would appear when the program had proved itself valuable.

Thus was born the Community Ministry Program, which nine years later is principally funded by external grants and has 57 graduates, coming from seminaries throughout the Northeast US..  These graduates have gone on to lead parishes of their own towards the transformative public ministry style they learned at Judson.

How the program operates:  The Judson Community Ministers are paid $5,000 for the academic year, and are expected to work a minimum of 15 hours a week.  Part of their time is spent in helping cover aspects of the church’s regular parish ministry (worship leadership, administration, pastoral care, education).  Another part is a 3-hour weekly seminar with Rev. Schaper and several lay leaders from the congregation.  At these sessions, the interns report, reflect, and get mutual feedback on their activities, learnings, questions and inspirations of the week, and also receive some formal instruction from Rev Schaper and guest leaders on aspects of practical ministry, internal and external.

The rest of the interns’ work is to help staff external ministry projects, with a focus on recruiting and leading members of the congregation into that work with them.  They have assisted Judson’s ministries through working with, among others, the New Sanctuary Movement that aids undocumented immigrant families, the Occupy Faith organization of interfaith religious leaders inspired by the Occupy movement to work for economic justice, and with local community-based groups on sustainable environment issues and women’s issues.

The risks the congregation took, on its new pastor and on its money, have also paid off in ministry, members and money.

The program not only exemplified Judson’s particular variety of urban ministry and “branded” it to the City’s social justice community as an effective faith-based function, it also changed the Judson congregation.  Instead of coming in on Sundays to find only grey-haired congregants, newcomers came in to see clusters of young people, taking leadership roles and having fun with each other.  In part because of this initially-“purchased” change in the way the church appeared to newcomers, it was able over time to triple the size of the membership and increase the budget.  Each Community Minister is assigned a lay mentor from the congregation, which Rev. Schaper believes is a key ingredient in the absence of resistance to the growth the church has experienced in membership and the changes it has achieved in tipping the age of the congregation to people under 40, and the complexion of the congregation to more diversity.  The whole congregation has consciously become a teaching congregation.

The Community Ministry program was the tipping point, says Rev. Schaper. “We hired youth – and they did the rest.”