The story below was originally posted by Baptist News Global and written by Norman Jameson. Dean Smith called American Baptist Churches affiliated Binkley Baptist Church in Chapel Hill his home church since 1962. His former pastor, Robert Seymour, includes words about Smith’s faith and notes that he looked at his work as a ministry.

Some idols hold up under scrutiny.

Dean Smith, known best to the world as the man who built University of North Carolina basketball into a program of consistent national significance, died Feb. 7 three weeks short of his 84th birthday.

The Tar Heel state that adopted him as a son, coach, winner and gentleman revered him as a virtuous icon in the battle of good versus evil. His death tipped the ink barrels of public sorrow, and tributes flowed across the pages of every newspaper and magazine. Television stations devoted entire shows to his life and career.

A memorial service designed for the national stage will be held Feb. 22 in the basketball temple named for him on the UNC campus — the Dean E. Smith Center. The funeral that better defined the real Dean Smith was held yesterday at the church he had called home since 1962 — Binkley Baptist Church in Chapel Hill. 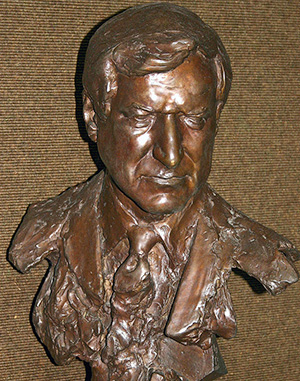 A bust of Dean Smith in the Dean Smith Center in Chapel Hill, N.C. (Photo by Rob Goldberg via Wikimedia Commons)

Smith’s pastor there, Robert Seymour, shared memories at the funeral of the man he counted as church member and friend. Seymour, 89, was pastor of the church from 1959 to 1988.

“One of the most important things he ever said was, ‘It’s only a game,’” said Seymour, who attended most games, but admits to a lesser passion for basketball than his wife. “His legacy is that of a remarkable man who grew up in a devout Christian home and saw his work as a ministry. The members of his team felt they were lovingly cared for and Dean became sort of a proxy father to many of the boys who played basketball for him.”

Smith started at Carolina as an assistant coach and had to prove himself to skeptics who doubted that at age 30 he could take the reins from his renowned predecessor Frank McGuire.

That didn’t keep him from speaking courageously on social issues.

Smith arrived in Chapel Hill just as the civil rights movement was starting to stir. Binkley Baptist was a local, regional and state leader in advocating racial justice and equal rights for blacks.

“We asked Dean to take a major responsibility and he could perceive this as his church work,” Seymour said. “We assigned him to go out and get the best black basketball player he could find and recruit him and get him to Chapel Hill, and he did.”

Recruited by Dean Smith, Charlie Scott became the first black basketball player at North Carolina and in the Atlantic Coast Conference. “He broke the racial barrier in the ACC,” Seymour said.

But that progress only cracked the barrier locally. “We had thought Chapel Hill was a liberal place,” said Seymour. “We found that not to be true.”

Binkley members wanted to ease open the doors of integration without knocking them down by force. One way was to ask Dean Smith to bring his black players to the popular restaurant The Pines when his team took meals there.

“Once the federal [integration] law was passed we paired people up to see if owners would abide by the law,” Seymour said. “When they saw that the person at the door with a black person was Dean Smith they let them in.”

“That story has been exaggerated to apocryphal proportions,” Seymour said.

But that doesn’t keep him from honoring Smith for standing tall on sensitive issues when so many in the public eye refrained from comment for fear of offending constituents.

“Dean was willing to take a public stand on social issues, which makes him a courageous man,” Seymour said. “He was for getting rid of the death penalty and he spoke of that frequently. He was for nuclear disarmament and was for integration from the earliest days.”

Such stands for Smith were just following the example of his father in Kansas who integrated the high school basketball team he coached. When asked if he was proud of the things he did to help integration, he told reporter John Feinstein, “You shouldn’t be proud of doing the right thing, you should just do it.”

Smith grew up in a strong Christian home in Kansas, in a church affiliated with the American Baptist Churches USA. His sister, Joan Ewing, is a graduate of Chicago Theological Seminary.

In his early years in Chapel Hill Smith “was intrigued with reading theology,” according to Seymour, who introduced him to the writings of Danish theologian and philosopher Soren Kierkegaard, who Dean often quoted.

Applying a label that every pastor appreciates, Seymour called Smith “a churchman.”

“Whenever he was in town, he was at church. He was generous in his support. Even during his last years his family brought him to church in a wheelchair.”