The General Council of the Baptist World Alliance on Friday July 11, 2014, adopted a resolution addressing the humanitarian crisis that is growing on our southern border as unaccompanied minors fleeing violence in Central America make their way to the border.  I highly commend it and its calls to action to us as the body of Christ.

The General Council of the Baptist World Alliance, meeting in Izmir Turkey July 9-11, 2014

ACKNOWLEDGES the human tragedy of the recent flood of unaccompanied minors to the United States who risk their lives in search of safety, economic resources and justice; 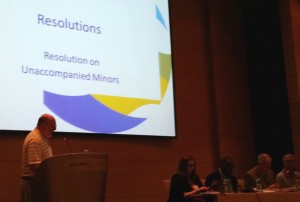 VOICES ITS CONCERN for these unaccompanied minors who are victimized by separation from their families, economic exploitation, lack of medical care and education, discrimination, and who are sometimes subjected to a hostile host environment;

REAFFIRMS the BWA Resolution on Displaced Persons of 2013 (#16) and our call to the governments of the countries involved to seek together a comprehensive approach to the underlying issues across the region that contribute to this social and human tragedy;

DISTINGUISHES that this is not primarily an issue of unprotected borders, but a humanitarian crisis affecting the countries of origin and all of the United States as the principle receiving country and especially California, Arizona, New Mexico and Texas;

CHALLENGES the churches in the region to practice hospitality and charity as they regard each minor as neighbor and child of God;

ENDORSES the message of the Texas Baptist Christian Life Commission which reads in part:

Whereas, United States Customs and Border Protection agents have apprehended more than 46,000 unaccompanied minors since October 1, 2013 and estimates apprehensions this year may reach 90,000; and

Whereas, increasing numbers of minors are coming from the Central American nations of Honduras, Guatemala, and El Salvador, where poverty is widespread and violence is rising; and

Whereas, these children, once in the United States, require proper care and supervision; and

Whereas, the United States has an overburdened immigration court system and a confusing policy framework; and

Whereas, unaccompanied minors who come to the United States often end up staying for years before their cases are resolved; and

Whereas, some communities have expressed hostility toward these children; and

Whereas, these children are not at fault either for the circumstances in their home countries or for the confusion created by human smugglers and American policy;

Therefore be it resolved, the Texas Baptist Christian Life Commission encourages [Baptists] to remember the many biblical injunctions about caring for the “stranger” or immigrant, as reflected in the words of Jesus, “I was a stranger and you welcomed me;”

JOINS our voice with theirs to urge our member bodies and churches to: