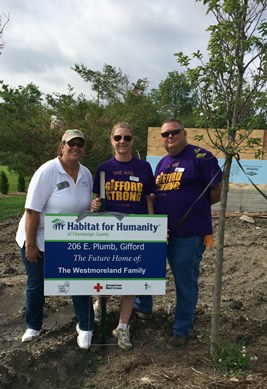 The build—which began on Sunday and continues through June 14—is in response to a November 2013 tornado that destroyed 90 homes in the Gifford, Ill.

Randy and Tracy Westmoreland are helping to construct the 1,500-square-foot, four-bedroom home that will be theirs. The home they had been renting was sold to another whose home was destroyed. The husband and wife chose to remain in Gifford to provide consistency and stability for their children, a 13-year-old son and 8-year-old daughter, both of whom were adopted and, therefore, struggle with anxiety.

“You folks don’t know us—you’re not from here,” says Randy Westmoreland. “For people who don’t know us to band together in Christ and to know that God wants for us to be helped—it sounds like a cliché, but it is truly overwhelming.”

Likewise, Margie Lewis is helping to construct what will become her 1,500-square-foot, three bedroom home. During the tornado, she says, her home’s roof landed on her automobile. “‘Thank you’ is just two little words,” she says. “It just doesn’t even begin to compensate for the generosity of total strangers giving the time to help you out. It’s just unreal.”

Veteran build volunteer Rev. Brian Romanowski brought nine other volunteers from First Baptist Church, Mohammed, Ill. He says it feels good to help disaster survivors who have not received as much attention as others. “It’s just a great way for them to find hope again,” he says.

“It’s just amazing for people to come together to give of their time, their talents and gifts,” adds Victoria Goff, ABHMS national coordinator of Volunteer and Disaster Response Ministries.

She notes that one home will feature a garage and 4½ feet of poured concrete crawlspace, while the other will boast a full basement—all amenities that are new to ABHMS build volunteers. “These homes are a bit different than what we have done in the past,” she says. “Traditionally, what we’ve built has been on concrete slabs.”

The theme of the two-week effort is Romans 10:15: “How beautiful are the feet of those who bring good news!”