NABF Event Looks at Future of Baptists in North America

“Do we want to survive, or do we want to thrive?” asked Dr. David Goatley, executive-secretary treasurer of the Lott Carey Foreign Mission Convention, in an opening message. “One conclusion is that if we want to just survive, we can keep going it alone.”

“Do we want to thrive? Do we want to be vibrant and vital and life-giving? Do we want to be on a journey where the end is not predetermined, where we grow and change and adapt? I think collaboration, and how we handle that question, will determine the answer,” said Goatley.

In the weeks leading up to the NABF event, George Bullard, general secretary of the NABF, surveyed registrants about what, to them, were the most compelling issues offering possibilities for collaboration moving into the future. From that survey, twelve issues were identified and discussed at the FutureBaptists event. The participants then narrowed those down to three: congregational transformation and renewal, systemic reform to end economic oppression, and evangelism. Bullard announced that the recommendations would be taken to 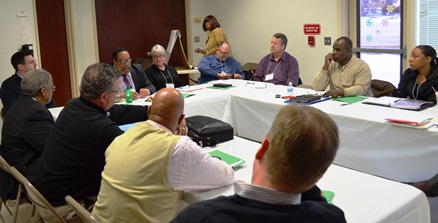 the NABF executive committee to consider a course of action.

“It is my prayer that we can build on the conversations here. There are things that propel us into collaboration and effective communication and my hope is that it will inspire us to discover those new ways in which we can be collaborative in the years ahead,”
said Reid Trulson, executive director of International Ministries, as he greeted attendees. 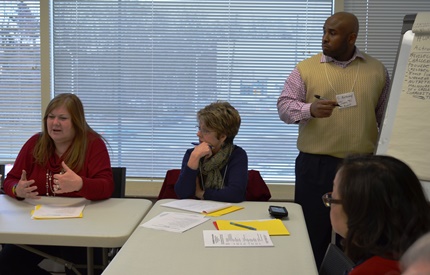 Dean Parker, director, ABCUSA Board of General Ministries:
“I feel a fresh move of the Holy Spirit during this convocation of future baptists. I feel like I can make a difference. I believe that God has anointed us to be here for a time such as this, to look at Baptists fifty years from now and what is important.”

Leta Williams, FBC of Herkimer, New York, and student at Eastern University:
“I think this event has prompted Baptists everywhere to leave behind feelings of stagnant complacency. We shared stories of our past that oriented us to where we are now, and it was so great to share common hopes and desires for the future. We realize now more than ever that the church is not the building, institution, or organization, but the people that the Holy Spirit can work in and through.”

Reid Trulson, executive director, International Ministries:
“The FutureBaptists event enabled Baptists from various traditions to discuss ways we might collaborate to bring about change in several significant areas. The small group in which I participated was remarkably energized in its discussions about congregational transformation, women in ministry and human trafficking. The ongoing value of the event will be seen as the NABF helps to facilitate collaboration in areas such as these.” 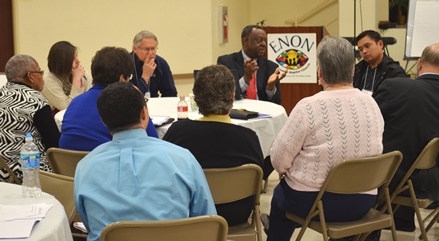 Rev. Anthony Jones, pastor of United Cornerstone Missionary Baptist Church, Winston-Salem, North Carolina
“What was most impressive was the breath of diversity represented within the Baptist domain, resulting in a wide variety of views, questions, and ideas regarding the topics of discussion. Also, I appreciated the small gathering which fostered greater intimacy leading to a more intense and productive dialogue. My hope is that the discussions will lead to initiatives, programs, and activities that will take less than 50 years.”

TaNikka Sheppard, director of Life Development, New Salem Missionary Baptist Church, Columbus, Ohio:
“The event was very thought-provoking. I was able to learn new perspectives on the Baptist Church and tradition. My hope is that the ministry and message of Baptists are relevant, truthful and life-giving.”

Rev. Dr. Reginald Mills, president of American Baptist International Ministries:
“I found it refreshing to sit at table in our group with a dozen ‘strangers’ and discuss difficult issues in a Christ-honoring way. NABF hopes to leverage our input to identify areas for future collaboration. I believe the NABF’s desire for Baptists to synergistically address the most menacing human issues is noble, sure. But in less grandiose language, it is simply the right thing to do.”