ABCUSA > In the Spotlight > Baptists Celebrate Judsons in Burma

The article below was originally published by the Associated Baptist Press. To view the original article, click here. To view the latest blog reports from American Baptist International Ministries, click here.

Baptists from the United States and around the world traveled this week to Myanmar to celebrate the 200-year anniversary of the arrival of an American Baptist missionary credited with bringing Christianity to the country in Southeast Asia formerly known as Burma.

An estimated 30,000 people were on hand at the start of a four-day celebration of the arrival of Adoniram Judson, one of the first missionaries to be commissioned in the United States and whose work gave birth to a mission society today known as International Ministries of American Baptist Churches USA. 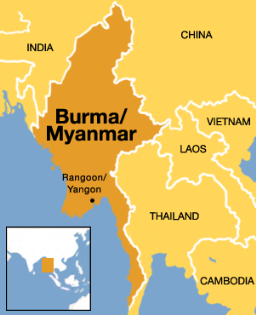 Adoniram Judson and his wife of seven days, Ann Hasseltine Judson, set sail for India Feb. 19, 1812, as Congregationalist missionaries. While doing translation work during the four-month voyage, Judson became convinced immersion was the mode of baptism in the Bible and decided to become a Baptist.

Denied entry into India, the couple arrived in Burma on July 13, 1813. Luther Rice, another American missionary who also converted to the Baptist faith, returned to the U.S. to raise funds for the General Convention of the Baptist Denomination in the United States for Foreign Missions, popularly known as the Triennial Convention, formed in 1814.

A linguist by training, Judson began early on translating the Bible into Burmese, a task completed in 1834. He also compiled the first Burmese grammar book and the first English-Burmese dictionary. His legacy today includes 1.6 million Baptists in more than 4,700 churches in a country that is anestimated 90 percent Buddhist and 4 percent Christian.

The Irrawaddy, a news-and-analysis website that covers Burma and the Southeast Asian region, described the Dec. 2-5 celebration in Rangoon as the first mass gathering of Baptists in Burma, where meetings of more than five people were forbidden during decades of military rule. More than 25,000 people registered for the commemoration, and planners estimated attendance could reach as high as 40,000.

The U.S. State Department restored diplomatic relations with Myanmar after reforms, including the 2012 election of pro-democracy leader Aung San Suu Kyi, a one-time political prisoner, to a seat in the Burmese parliament.

The U.S. Commission on International Religious Freedom, an independent group that advises the State Department, however, still considers Burma a “country of particular concern,” a designation for the world’s worst violators of religious freedom that the State Department last used in 2011.

The Kachin News Group, based in Chiang Mai, Thailand, reported that a group of Kachin Baptists traveling by train to the Judson celebration were pelted with stones at a station in central Burma.

Evelyn Hanneman, operations coordinator for the Baptist Peace Fellowship of North America, said she jumped at an invitation from a colleague at the Myanmar Institute of Theology to attend.

“I knew I wanted to be there,” Hanneman said in a blog report dated Nov. 27. “I learned about Ann and Adoniram Judson as a child in Sunday school and am thrilled that I will be able to visit those ‘Golden Shores’ and join the Baptists there to celebrate the ministry of the Judsons.”

Duane Binkley, a missionary dually appointed by American Baptists and the Cooperative Baptist Fellowship, also made the trip.

“I am in awe of what God has accomplished through the life of Adoniram Judson,” Binkley wrote while en route from Chiang Mai, Thailand. “At the same time, as I think of his life, I see how he and none of us do anything on our own.”

Binkley pointed out that Judson’s work was bolstered by his family, Baptists in the U.S. and his first Karen convert, a formerly illiterate man named Saw Ko Tha Byu, who went on to become an evangelist who earned the nickname “The Karen Apostle” before his death in 1840.

“So as we go to celebrate Judson’s life and ministry we really celebrate what God has done and is doing in Burma and around the world,” he said. “What a privilege to participate in this event and even more so to be a part of the Judson legacy.”

After the celebration, a Baptist Peace Fellowship delegation will continue its “friendship tour” in Burma until Dec. 20.