ABCUSA > In the Spotlight > Iowa Church Having Fun Loving its Neighbors

“Would you like some Christian toilet paper?” Regan Stoops, pastor of First Baptist Church in Mt. Pleasant, Iowa, explains how church members are loving their community through toilet paper, ice melt and other acts of kindness. He recently spoke to delegates and guests at the recent American Baptist Churches of Nebraska region meeting. 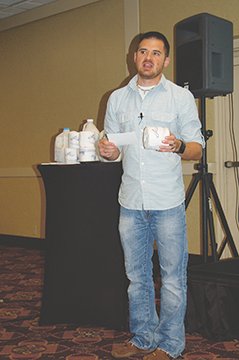 How would you feel if someone came to your door on a Sunday morning (assuming you aren’t in church) and asked you that question?

Members of First Baptist Church in Mt. Pleasant, Iowa, asked their neighbors that question one Sunday morning — an experience that set the congregation on a missional path, according to Pastor Regan Stoops.

Speaking at the American Baptist Church of Nebraska region convention in Grand Island, Neb., on Sept. 21, Stoops said often people would ask, “What does the church do?” or “What is the church for?”

He usually responded by talking about Sunday School, worship, fellowship and other aspects — what churches do, rather than what the church “is.”

Stoops became First Baptist’s pastor at 25 years old, two days after graduating from seminary. “I was ready to change the church,” he said. The congregation had about 50 members, almost all over 80 years old.

He said he thought that his and his wife’s arrival would “change the church…like that,” snapping his fingers. A lot of visitors showed up at first, but within a few months, the newness wore off and not as many came.

Stoops began thinking and praying about First Baptist’s direction. He asked: What would the church look like if it were missional? What would happen if it could be the church for the community?

Then he led church members to try to discover specific community needs. While uncovering physical needs, First Baptist members learned the deepest need is love, he said. “They need to experience the love of Christ without an agenda on top of it.”

“I think if Jesus were here, this is the kind of stuff he would do,” he said. Jesus had a “show-and-tell ministry” and believers are called to do the same. “How good is telling if no one comes to hear about the kindness of Jesus?” Stoops asked.

On a September 2012 Sunday morning, members arrived as they normally did. They sang a couple of songs to open worship service, just as they usually did. But instead of preaching a sermon, Stoops shared Scripture and divided the congregation into teams. He distributed bags of toilet paper and sent the teams out into the community. Those who either were physically unable or who did not wish to go out were asked to remain at the church and pray.

Of the 110 attendees that morning, more than 80 agreed to go out. As they delivered rolls, participants asked homeowners if they could offer a 10-second prayer. They shared stories at lunch about the neighbors they had met.

Being missional through kindness continues at First Baptist. Last winter the church was given two pallets of ice melt. Members divided it into gallon-sized jugs and distributed it to neighbors.

One project involved forming groups and giving $5 to each team member. Groups determined how the money would be used in ministry.

After Jesus healed a lame man, he told the man to pick up his mat and walk. Instead of rejoicing over the cripple’s healing, “Jewish leaders only paid attention to the mat,” Stoops said. “Sometimes we do the same kind of things.”

“We must start by getting the priorities straight…. Don’t overlook sin, but it’s not the starting place,” he added.

Stoops challenged listeners to realize that believers sometimes spend so much time taking care of themselves. “We got to begin to overflow…not just fill up [spiritually]…and get out into the world,” he said.

Motivation also has to be watched. He noted that the church has discovered opportunities to minister “but we have seen zero people come to the church” as a direct result. “If our goal was to grow, we’d be failing…. But if our goal is to share love…we are a success.”

Now the church is moving toward making kindness and missional attitude a lifestyle. “We’re not there yet,” he said.

But they have experienced Sjogren’s claim: “Where the Spirit of the Lord is, there is fun.” Stoops affirmed that for First Baptist in Mt. Pleasant, “It’s really fun to be where God is.”