NEW YORK, NY (ABNS 8/7/13)—MMBB Financial Services mourns the death of Rev. Dr. George H. Tooze, Jr. He died on August 3, in Farmington, ME, surrounded by family and friends after a long battle with stomach cancer. Dr. Tooze’s MMBB service began in 1997; he was elected president of the Board of Managers in 2003.

“During his tenure on the MMBB Financial Services Board, Dr. Tooze focused extensively on governance issues,” Louis P. Barbarin, executive director of MMBB Financial Services observed. “He championed MMBB’s need to make decisions based on its fiduciary responsibility to the thousands of churches and church staff the Board represents.” 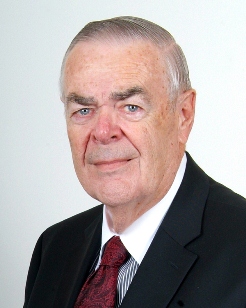 Dr. Tooze understood that MMBB’s success in the increasingly complex and competitive environment for retirement planning required that MMBB recruit people to the Board of Managers with experience in these areas. To accomplish this, Tooze worked with American Baptist Churches USA (ABCUSA) leadership to give MMBB the flexibility to recruit board members with business and investment experience.

“George Tooze was a great leader,” commented Gwynn Perlich, vice president of the MMBB Financial Services Board of Managers. “His passion for ‘the better maintenance of the ministry’ sets an example for all of us to embrace. We will all strive to continue the work and direction he laid in front of us.”

Dr. Tooze also played a central role in the selection of two of MMBB’s seven executive directors—Sumner M. Grant and Louis P. Barbarin. He saw both as uniquely qualified to advance the mission of the organization.

“First and foremost, George was a friend of over 50 years,” said Rev. Dr. Sumner M. Grant, former executive director of MMBB and a classmate of Dr. Tooze at Gordon-Conwell Theological Seminary. “I was nurtured and blessed by his relationship. I deeply mourn his loss. George was also an exceptional MMBB president. He brought to his office a combination of business sense and pastoral care. Among his many contributions, his signature achievement was strengthening MMBB’s governance structure. Though MMBB’s loss is great, George’s spirit and legacy live on“

Rev. Dr. George H. Tooze, Jr., graduated from Gordon College and Gordon-Conwell Theological Seminary. He earned a D.Min. from Andover Newton Theological School. In 40 years of pastoral ministry, he served churches in Gardner, Beverly, and Malden, MA, and Indianapolis, IN, retiring from the First Baptist Church, Indianapolis in 2003.

“George was one of those ‘forces of nature’ in ABCUSA life whose presence and contributions will long be remembered,” A. Roy Medley, general secretary of ABCUSA remembered. “I am fortunate to have been able to call him a friend as well as a colleague. He faced his cancer as he faced everything in life, with faith and determination and was an inspiration to us all.”

Dr. Tooze’s ABCUSA service included: member of the Board of National Ministries (BNM) and its Finance Committee; chair, BNM’s Investment Committee; member, Franklin College Board of Trustees and its Executive Committee, and chair of its Trusteeship Committee. He is survived by his wife Constance Taylor Tooze.

“George Tooze was a man of great passion for his Lord, his family, and his life-long research into the life of Emily Chubbock Judson,” stated Ruth Clark, president of ABCUSA. “George did not easily hand out compliments, but when one was received it was a treasure. I treasure George’s encouragement and belief in me and the chance to serve alongside him in the leadership of ABCUSA.”

Dr. Tooze was the leading scholar of Emily Chubbuck Judson. His magisterial seven-volume series, The Life and Letters of Emily Chubbuck Judson (Mercer University Press), provides invaluable insights into Emily’s entire career, first as a literary figure who made her living by her pen (writing as Fanny Forrester), later as a missionary partner with Adoniram Judson, and then as the first historian of the Burma mission.

“George’s passion for Emily Chubbuck Judson was known to anyone who knew him,” commented Deborah Van Broekhoven, executive director of the American Baptist Historical Society. “That passion grew as he hunted, letter by letter, poem by poem, year by year through the words of Emily Chubbuck. I am incredibly joyous about this accomplishment and sad that he did not live to receive all the accolades due him and his seven-volume opus.”

A non-profit Christian organization, The Ministers and Missionaries Benefit Board (MMBB) has served churches and faith-based organizations since 1911. With a strong expertise of the ministry and its complex tax laws and other financial issues, MMBB serves more than 17,000 members across a wide range of denominations, offering “one-stop shopping” for employees including retirement, life, disability, medical and dental plans—to ensure that employers and their employees have sound peace of mind and financial security.