Teaching in Myanmar: A Reflection by Dr. C. Jeff Woods

ABCUSA > In the Spotlight > Teaching in Myanmar: A Reflection by Dr. C. Jeff Woods

The reflection below was written by Dr. C. Jeff Woods, associate general secretary for Regional Ministries, American Baptist Churches USA. Woods was given an opportunity to teach research design at the Myanmar Institute of Theology in March 2013.

I have always embraced our ABC “teaching others to fish” philosophy, but never had the opportunity to embrace it internationally until now.

I recognize that not everyone shares my love for research, statistics, and analysis, but I have always viewed these subjects as an opportunity for ministry students to learn new techniques that can equip them to address the most compelling needs of their neighbors. The dramatically shifting cultural landscape in Myanmar proved to be a rich space for the interests and passions of the Myanmar students to surface and take shape.

Myanmar students are a beautiful and generous people. They are also insightful and passionate. While the class far exceeded my expectations, I admit that it began a bit sluggishly.  I was tired from the 30 hour trip starting in Columbus, through New York, with a six hour snow delay in Germany, then a stop in Singapore, all before reaching the Yangon airport in Myanmar.  My fatigue lessened when I realized that some of the students had traveled for four days to get to class on a slow moving bump-laden bus.  But even greater surprises awaited me in the classroom.

I entered the classroom to find 32 students rather than the 12 that I was expecting, as all three cohort groups were invited to take the class (with one of the three groups auditing).  The size of the group was overshadowed even more by the new culture to which I had been inserted.  My life mission statement is “to find creative means of accomplishing God’s age old tasks,” and it was certainly put to the test in this scenario.

Though I had previously taught students of many ethnic backgrounds, I had never been completely immersed in a new culture while teaching.  My preparation confirmed that I was in a hi-grid, hi-group culture, as opposed to the low-grid, low group U.S. culture to which I had been accustomed, which meant that verbal responses to questions posed to the large group were delivered cautiously and intermittently.  Experimenting with various teaching techniques eventually surfaced some successful strategies. The proven techniques of appreciative inquiry and conversation café helped students engage the material more deeply in small groups and dyads, along with other newly discovered practices.

One of the reasons why we thought this research approach might work in a new culture is that it is very conceptually based, as opposed to being theoretically or textbook based.  I strongly emphasize that the best information is gathered when one’s research methods align with one’s clarification of the problem.  What a student chooses to study should dictate how it is studied.  One of the benchmarks in the class is reached when students are able to identify suggested qualitative or quantitative methods from the verbs in various research questions.  The simple practice of asking the students to “tap once for qualitative and twice for quantitative” proved to be an easy way to surface audible group responses for this and other benchmarks in the class.

Another benchmark is identifying whether a problem statement suggests a “discovery” approach or a “development” approach to research.  American problem statements have typically run 80/20 on the development side, but the Myanmar projects carried about a 50/50 orientation which could prove to be very exciting as the students navigate new approaches to their emerging culture.

As I woke up one morning and realized that the students had truly grasped new techniques for collecting data and analyzing their ministry contexts, I was humbled to consider how these new tools might impact the many Myanmar divisions and states for Christ in the future.

While students surfaced baleful sagas of violence and oppression during the context analysis classroom segments, it is clear that transformation is in the air. Many of their emerging project ideas are aimed at framing new cultural identities, forming strategic partnerships and networks, and forging new approaches to evangelism and discipleship amidst this blossoming society.

By the end of the week, as each student surfaced their potential research questions, it was eviden 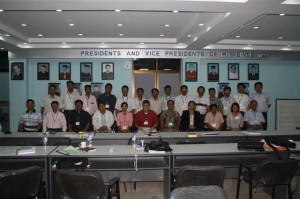 t that each one was doing so with a sense of hopefulness and confidence to make a difference in their places of ministry.

As I gaze upon at the classroom photo, I can’t help but dream about the next generation of ministry students who may someday reflect upon the foundational nature of this group’s collective research efforts and discoveries.  God is truly at work in this part of the world. It is has been a privilege to teach research design to the first class of DMin students in the exchange program between our ABC Central Baptist Theological Seminary and the Myanmar Institute of Theology.