“Dr. Jump’s service as a missionary in Congo and in the U.S. as the Executive Director of American Baptist International Ministries (1965 – 1983) inspired confidence, creativity and co-operation,” commented IM’s current Executive Director, Rev. Dr. Reid Trulson. “His colleagues and staff 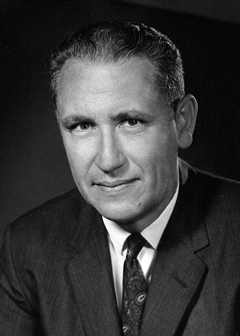 regarded him with profound respect, affection and admiration. His deep devotion to the Lord, his love of family, his commitment to the work of International Ministries and his sense of humor made him a leader and co-worker whose influence has continued to be felt for these many years.”

Dr. Jump and his wife Margaret were appointed in 1944 to serve as missionaries of the American Baptist Foreign Mission Society in Congo. Trulson noted that the Jumps departed for Congo in 1945. “This was during the height of World War II,” he said, “so Chet and Margaret sailed from Philadelphia on a neutral ship.”

The Jumps were first stationed at Vanga where, following the war, a great mass movement took place of people moving to faith in Christ. The church extension work of church leaders and missionaries had already led to the baptism of thousands of people. Participating in evangelistic work with the Congolese Baptists, Dr. Jump carefully examined and from December 1951 to October 1953 baptized nearly 10,000 new believers. During the Jumps’ two terms of service at Vanga, more than 125 villages were added to the Vanga outreach and more than 32,000 persons were baptized.

In 1957, Dr. Jump was named field secretary and legal representative for IM in Congo and the couple moved to the capital city of Leopoldville. (Leopoldville was renamed Kinshasa in 1966. Congo was named Zaire in 1971 and renamed The Democratic Republic of the Congo in 1997.)  In 1962 Dr. Jump was called to Valley Forge to continue work he had begun in Congo as area secretary.

Dr. Jump is survived by his wife, their two sons and two daughters. A memorial service is being planned for some time in January at First Baptist Church, Lewisburg, PA.

American Baptist International Ministries was organized in 1814 as the first Baptist international mission agency in America. It began its pioneer mission work in Burma and today works in Asia, Africa, Europe, the Middle East and the Americas serving more than 1,800 long-term and short-term missionaries. Its central mission is to help people come to faith in Jesus, grow in their relationship with God, and change their worlds through the power of the Spirit. It works with respected partners in over 70 countries in ministries that meet human need.