ABCUSA > In the Spotlight > ABCUSA Vice President Reflects on Conference

ABCUSA Vice President Don Ng attended the recent 2012 Asian Conference & Asian American Baptist Caucus Convocation in Waltham, Mass. Below is a meditation written by Ng about his experience and excitement for the future of American Baptist Churches USA as we learn from others and grow in new ways.

In August, the Asian Caucus and ABHMS sponsored a national conference at the First Baptist Church, Waltham, MA. One of the highlights was to visit Salem where Adoniram and Ann Judson were commissioned and set sail to Burma, the beginning of modern foreign missions. We 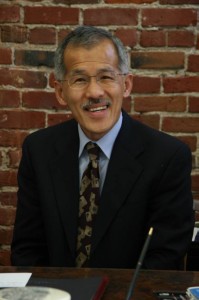 visited the FBC of Salem where the famous stained glass window known as the “missionary window” that portrays the sailing of the Judsons aboard the ship Caravan is found. Then we went to the FBC of Malden to visit a plaque that marked his birthplace.

When we were in Salem, there was a display of a number of Judson artifacts including a small letter tube container that was used to protect correspondence on the long journey across the sea. When the Burmese American Baptist members saw this artifact, they immediately seeing the Burmese language noticed that it was displayed upside down. When Pastor Renee Keels heard of this she apologized for the mistake and reassured the group that it will be displayed properly as soon as possible.

One of the remarkable developments that is happening to American Baptists today is the rapid emergence of Burmese, Chin, Karen, Kachin and other Baptists who have come to the U.S. as the result of the warring conflict in Burma, also known as Myanmar. A number of ABC churches have become completely revitalized with these new members from Burma. In some communities where there are larger concentrations of Burmese, new churches are being organized as Karen Baptists and Chin Baptists. From these new American Baptists friends, we are learning how God continues to work to bring the Good News of the Gospel to people everywhere.

When the first Burmese refugees started to arrive in the U.S., we have said that the “Children of Judson are coming home.” Just like our own children who can teach us new things that we haven’t even thought about, the children of Judson are now ready and prepared to teach us new things too. They taught us that the Burmese words printed on the letter tube container were displayed upside down. 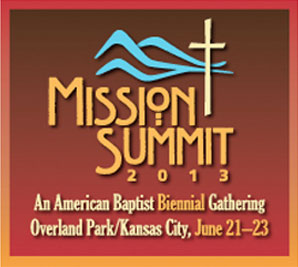 About 9 months from now, the 2013 Mission Summit, an American Baptist Biennial Gathering, will be meeting in Overland Park, Kansas on June 21-23. As we celebrate the 200 Anniversary of the Judsons to Burma, we’ll also be learning from our Burmese American Baptists who are ready to partner with all American Baptists for ministries and missions. We will join together to share challenges, ideas, and information with American Baptists from all backgrounds through this “Mission Summit.” I hope you will join with me in celebrating this occasion next June!