The ICCR August 9 statement—which points out that the investors represented manage $24.7 billion in assets and hold 800,000 shares of News Corp—cites “strong concern” about the corporation’s “unethical” activities, including allegations of phone hacking and bribery as well as unprecedented access to leaders, law enforcement officials and elected representatives.

“As people of faith we must never underestimate our influence and power to bring about systemic change,” says Michaele Birdsall, ABHMS treasurer and chief financial officer. “Even in the midst of what appears to be insurmountable odds to creating a just and sustainable world, we join our voices with our colleagues at ICCR, believing that together we can and will make a difference.”

The statement (see below) also outlines critical reports issued by U.S. and U.K. proxy advisory firms about the composition of the corporation’s board of directors and its resulting risk to shareholders.

American Baptist Home Mission Societies’ socially responsible investing efforts include stock screens and active ownership strategies (including proxy voting, dialogues and shareholder resolutions). ABHMS has a long history of justice ministry through fiscal policy, including activism as a founding organization four decades ago of ICCR—the pioneer coalition of active shareholders who view the management of investments as catalyst for change. Today, ICCR’s 300 member organizations, with more than $100 billion in assets under management, have an enduring record of corporate engagement that promotes justice and sustainability throughout the world.

The domestic mission arm of American Baptist Churches USA, American Baptist Home Mission Societies ministers as the caring heart and serving hands of Jesus Christ across the United States and Puerto Rico through a multitude of initiatives that focus on discipleship, community and justice. 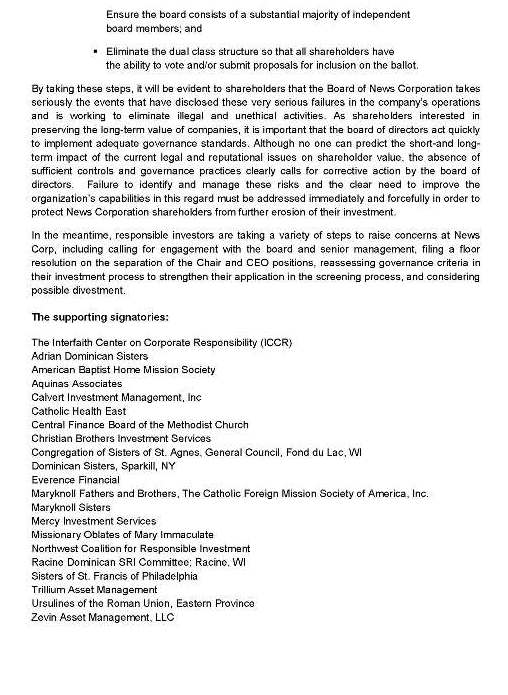